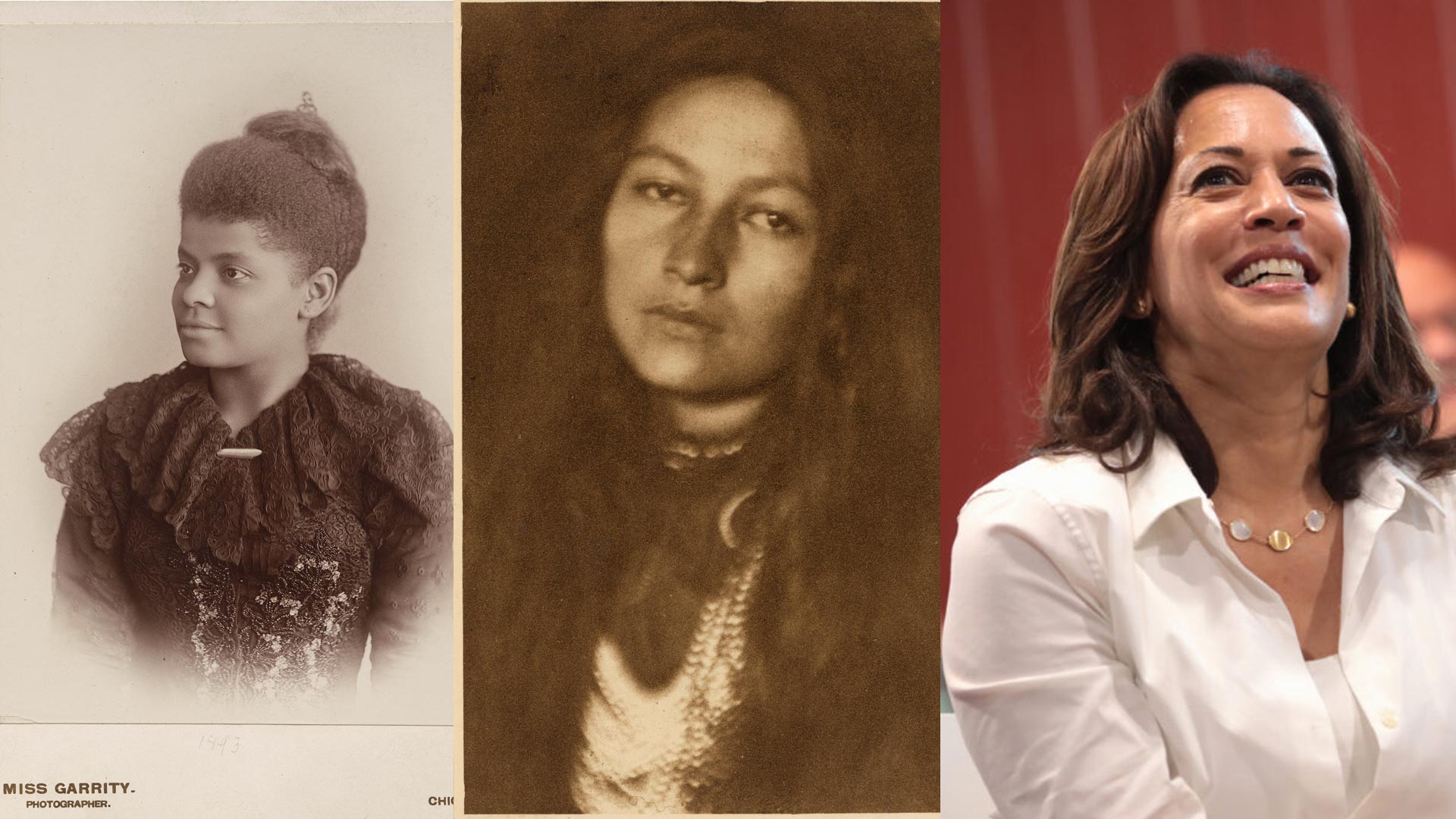 In a moving speech (external link) on November 7, 2020, after the confirmation that she would become vice-president elect, Kamala Harris paid tribute to the many women who fought for the right to vote and participate in American democracy: “I reflect on their struggle, their determination and the strength of their vision, to see what can be, unburdened by what has been,” she said. “I stand on their shoulders.” Referencing the work of women throughout the country who canvassed and rallied to help her win office, she also mentioned the historic fight women in this country waged to earn their right to vote, noting in particular that native women and women of color have been “too often overlooked” in that acknowledgment. For their heroic work, Black women have proven to be “the backbone of our democracy,” she said.

Standing on Their Shoulders

You can go to meetings; you can vote resolutions; you can attend great demonstrations on the street; but, after all, the only occasion where the American citizen expresses his acts, his opinion, and his power is at the ballot-box. Zerelda G. Wallace at hearing of Senate Judiciary Committee, January 1880

As part of our current temporary exhibition, Debates, Decisions, Demands: Objects of Campaigns and Activism, we include photographs of notable suffragists and objects created both for and against their cause. We also present 2 poster exhibits from the Smithsonian Institution and the National Archives: Votes for Women: Portraits of Persistence (external link) and Rightfully Hers: American Women and the Vote (external link), which document moments and notable figures in women’s suffrage.

Senator Kamala Harris’s decision to wear white (external link) was a gesture toward the women’s suffrage movement, which adopted white clothing because of its symbolism of purity. When the Constitution was drafted in 1787, it made no mention of women. While the ratification of the 14th and 15th amendments, in 1868 and 1870, gave citizenship to all born in the US and gave African American men the right to vote, women were still deprived of that right. Women who had been involved in the antislavery movement felt burned by this fact and so continued in their efforts to gain voting rights for themselves. They engaged in this battle for over 70 years, through marches, boycotts, petitions, fundraising, and various forms of civil disobedience.

Ida B. Wells-Barnett (external link) was the daughter of former slaves. She sued the city of Chesapeake, Ohio, and Southwestern Railway in 1883 after she was dragged from her seat in a segregated ladies’ railway car. She had refused to move from the designated car for white women to the one designated for black women. She won her case in Shelby County but lost at the Tennessee Supreme Court. Wells became a journalist and then part owner and editor of the Memphis Free Speech and Headlight in 1889. For 4 decades, she wrote about and fought against lynching, writing and publishing a famous treatise, Southern Horrors: Lynch Law in All Its Phases.

Zitkála-Šá (Red Bird) (external link), Gertrude Simmons Bonnin, was a Lakota Sioux, an activist, and a writer, who lived from 1876 to 1938. She fought for suffrage and for Native American rights. She helped found both the Society of the American Indians, in 1907, which was the first national all-Indian organization to advocate for Indian rights, and the National Council of American Indians, in 1926. She also published autobiographical stories in the Atlantic Magazine and in Harper’s Monthly. In 1901 she published Old Indian Legends, and in 1913, wrote the libretto for the opera, The Sun Dance, the first opera by a Native American.

While they donned white to symbolize purity, the suffragists were often rowdy, and sometimes violent, in their campaign for justice. For 40 years, the British suffragist, Emmeline Pankhurst (external link), née Emmeline Goulden (1858–1928), fought for a woman’s right to vote. She was jailed upward of 14 times. In prison, she waged hunger strikes with fellow suffragists, which caused the guards to use force-feeding on the inmates (external link). She also engaged in a rush on the House of Commons, and along with other suffragists, committed arson and even sometimes bombed buildings to force attention on the issue of suffrage. In 1928, the year she died, women were finally given the right to vote in England.

You can learn more about these remarkable women by visiting Spurlock’s current exhibit, Debates, Decisions, Demands: Objects of Campaigns and Activism. In addition, many of the Smithsonian’s museums and other educational institutions have developed materials to commemorate the centennial of the ratification of the 19th Amendment to the Constitution, and to broaden our understanding of U.S. history through the stories of women.

Rightfully Hers: American Women and the Vote (external link) is organized by the National Archives and Records Administration. In celebration of the 100th anniversary of the 19th Amendment, the National Archives has launched a nationwide initiative and major exhibition that explores the generations-long fight for universal woman suffrage. The exhibition is presented in part by the Women’s Suffrage Centennial Commission and the National Archives Foundation through the generous support of Unilever, Pivotal Ventures, Carl M. Freeman Foundation in honor of Virginia Allen Freeman, AARP, and Denise Gwyn Ferguson.

Votes for Women: A Portrait of Persistence (external link) is organized by the Smithsonian Institution Traveling Exhibition Service in collaboration with the National Portrait Gallery. This project received support from the Smithsonian American Women’s History Initiative, Because of Her Story.

Votes for Women: A Portrait of Persistence on the Smithsonian Learning Lab

National Museum of the American Indian Previous Post: Students highlighted for Graduate Student Appreciation Week
Next Post:The Boy Orator of the Platte on a Plate