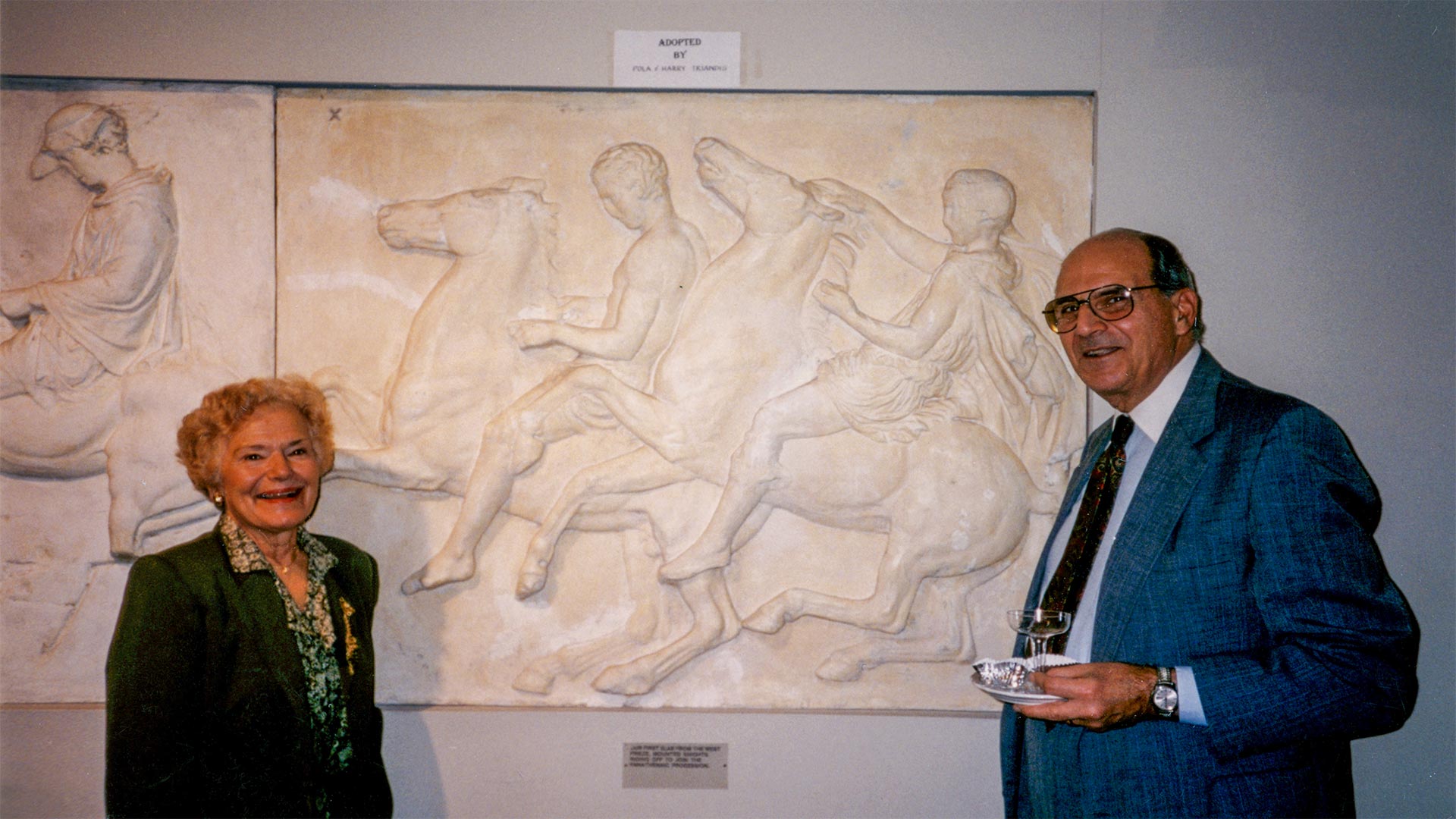 After losing one of our longtime supporters, Pola Triandis, earlier this year, the Museum recently hosted a celebratory talk and reception in her honor. Attended by a full house of friends and family of Pola and the Museum, including a sizable number of previous members of the World Heritage Museum and Spurlock Guilds, the gathering celebrated Pola's achievements and contributions to the Museum throughout the years.

Kathy Skaperdas Chapin, daughter of longtime Guild member Claire Skaperdas, described Pola as the "guiding spirit of the Guild" and that she "was involved in every event and enjoyed all the fun and FUNdraising events." Chapin shared that Pola's work alongside then newly appointed director, Barbara Bohen, breathed new life into the Museum as it began its transition from the World Heritage Museum to the Spurlock Museum. The Guild—initially headed by Pola— eventually raised about $500,000 to support the Museum.

Without Pola and the small group of women who started the World Heritage Museum Guild, I doubt whether the Spurlock Museum would exist. That original handful of dedicated and determined women of the Guild played a vital role in securing the survival of the original World Heritage Museum during those difficult early years.Barbara Bohen, previous Museum director

Pola also worked for many years as a Museum volunteer for the Registration and Education sections, including right up until when she moved from the town, friends, and faculty, she loved so much to California to be closer to her daughter Louisa, who shared a touching story at the event. "When I asked my mom shortly before she died what she was most proud of in her life, she said 'my work with the Spurlock Museum'."

Perhaps most notably, Pola helped the Museum survive possibly the biggest test in its history. Faced with a budget crisis in 1979 and 1980, the upper administration of the University began a process to explore closing the Museum permanently to recover its then $67,000 budget. A committee of professors in related academic units—John Bateman and Jim Dengate of Classics, Richard Mitchell of History, and Eugene Giles of Anthropology— was formed to evalute the Museum. Their report found significant value in the Museum's collection for many aspects of the University's core functions, prompting the University to create another committee to come up with a solution to the challenge of running the entire Museum on a vastly reduced $24,000 budget.

The second committee included 3 members of the original committee, as well as David Bright of Classics, Gerald Ziff of Art History, and Pola Triandis of Continuing Education. The results of that committee's work showed a desperate need for about twice as many staff as could be paid with the entire $24,000 allocation. The members went to work asking their unit heads to fund 33% graduate assistantships, which was a little easier ask for academic units than it was for Pola's unit, Continuing Education.

Pola's daughter Louisa characterized her mother as "tenacious" and "not somebody to take no for an answer." As a result of this sort of dedication and care for the Museum, Pola was successful in securing the last 33% assistantship needed. Not only that, but the committee managed to secure these assistantships with open-ended timeframes that eventually led to almost a decade of interdepartmental support of the Museum. Upon the conclusion of this story about Pola's critical support, Director Emeritus Wayne Pitard shared that "this is why she will always be one of the Spurlock's angels."

Following Pola's wishes as shared with her family—a talk was given on the Museum's Parthenon frieze panels, some of Pola's favorite artifacts in the Museum's collection. The talk was given by Director Emeritus Wayne Pitard, who shared many fascinating stories about how the Museum collected the reproductions of the frieze panels and the significance that they hold for scholarship and research.

Professor Pitard ended the event with a thoughtful connection to Pola’s legacy. Some figures on the original Parthenon frieze panels have been lost over the years due to vandalism, pollution, and accident, but our reproductions maintain those details because they were cast from molds made before that damage. He said of Spurlock, "Here, [visitors] can see 13 superb figures that cannot be seen in the British Museum, in the Louvre, or in the Acropolis Museum. They are figures that are in one way gone, but in fact, are still with us forever... like Pola."

The exhibits, collections, and Museum services she helped support are a testament to Pola's legacy.

Previous Post: Featured Object: Bhutan Dagger and Sheath
Next Post:We have tangled tassels to talk about!