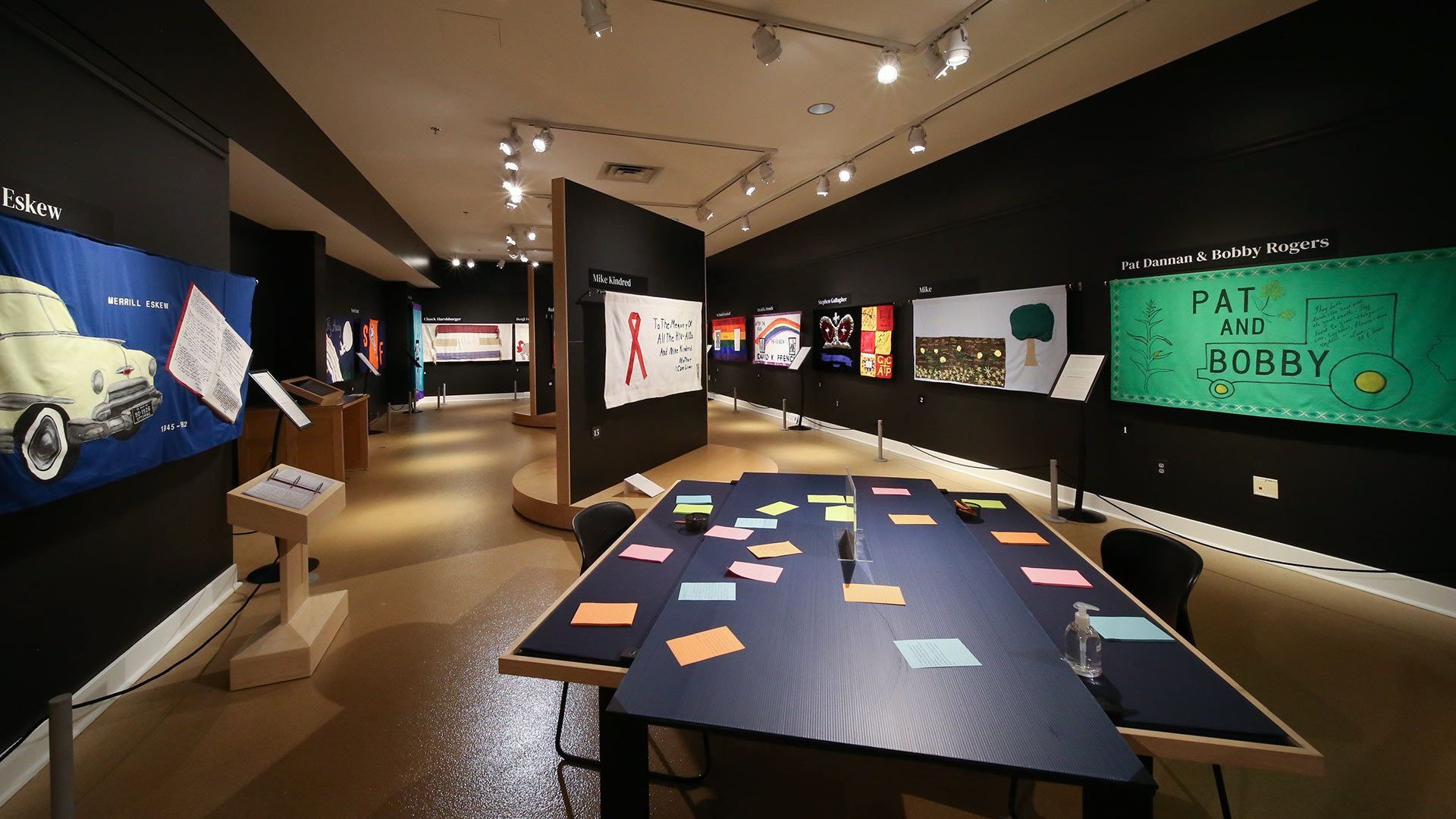 The AIDS Memorial Quilt began as a grassroots effort in 1985, by the activist Cleve Jones and others in his circle who wanted to document the lives of friends who had died of AIDS, and who they feared history would neglect. Their project was called the NAMES Project AIDS Memorial Quilt. On October 11, 1987, the quilt was displayed for the first time on the National Mall in Washington, DC, during the National March on Washington for Lesbian and Gay Rights. It was larger than a football field and included 1,920 panels. By 1988, there were 6,000 panels. Today, the National AIDS Memorial is the keeper of the more than 50,000 quilt panels, commemorating 105,000 individuals who died of AIDS. In all, more than 700,000 lives in the US have been lost to AIDS and more than 1.1 million people live with HIV.

We are honored to be showcasing some of these quilt panels in our new exhibit, Sewn in Memory: AIDS Quilt Panels from Central Illinois. The exhibit features over a dozen panels originally made in the 1980s and early 1990s for the AIDS Memorial Quilt by residents of Central Illinois. Each of the panels in the exhibit commemorates a person who died of AIDS, or of an AIDS-related ailment.

Sewn in Memory is a community-curated exhibit, created with our collaborators, the Greater Community AIDS Project of East Central Illinois (GCAP), which holds the panels and assisted in exhibit research and creation; History Harvest, a course here at UIUC, which seeks to gather historical stories and documents from local communities; and Illinois Public Media (WILL), which is working on documentary films about the panels with UIUC Journalism students.

We are honored to host this exhibition, and we join our collaborators in remembering the lives of these special people our community lost too soon. Now, almost 30 years after the panels were originally displayed, we are again living through a pandemic that has produced stigma and highlighted inequities. By displaying these panels, we hope to ignite new discussions about health, fear, and hope. Elizabeth Sutton, Spurlock Museum Director

People need recognized spaces to mourn, to remember, to commemorate, to be inspired by the work that has been done, and to celebrate the positive changes that have been made. We hope the exhibit can offer ways for people to come together around these timely needs. We’re also thrilled to highlight the work of two groups of University students: the History Harvest and Journalism classes who have worked directly with local communities and bring their voices to museum visitors. Beth Watkins, Education & Publications Coordinator and one of the exhibit organizers, Spurlock Museum

Funding for the Sewn in Memory: AIDS Quilt Panels from Central Illinois exhibit is generously provided by the Dr. Allan C. and Marlene S. Campbell Fund.

GCAP collaborates locally to serve the community by providing educational outreach to the public and support to those living with HIV/AIDS. Among its many services, GCAP provides transitional housing and emergency financial assistance. GCAP is deeply indebted to community leaders, who in the early and mid-1980s, formed the Gay Community AIDS Project. With their foresight, the founders realized that sweeping HIV/AIDS under the table was not the answer. Today, there is a new generation who learned about the disease because of GCAP’s efforts. According to Executive Director, Mike Benner, while the demographics of the disease have changed, GCAP continues to be a community that is as committed as ever to its original purpose, while also expanding resources to new demographics. Benner reminds us that though we live in an age when HIV is more easily managed with novel medications, the people represented by these quilts did not have treatment options, and they “were infected prior to knowing what the modes of transmission were. It is in this spirit that we remember and pay honor to those that did not have the options we have today.”

We commemorated 40 years since the first cases of what came to be known as HIV/AIDS first appeared. HIV/AIDS hit the large cities first and came to Central Illinois in the 1980s. In ‘81, when my dear friend Steve Gallagher tested positive, my life turned upside down. I watched Steve and other dear friends, like Merrill Eskew, get diagnosed, become extremely ill, and suffer through agonizing, ugly deaths. I don't want their lives, their names, or their deaths to be forgotten. This is why I'm thrilled to share their stories and bring to light the stories of victims who I didn’t know as well. The Spurlock exhibit is bringing the community's attention to this period of our history, which frankly isn't over. We have a vaccine for COVID, after such a short time, but after 40 years we still don't have a vaccine for HIV/AIDS. Jerry Carden, Founding Member, Greater Community AIDS Project (GCAP)

History Harvest is a collaborative public history project in which students engage with members of the public to collect and digitize documents and artifacts of historical interest for scholarly and community research. Originally developed at the University of Nebraska, Lincoln, History Harvest engages with individuals, communities and institutions to digitize important historical documents for community and scholarly use in history projects that sometimes only these materials can illuminate, which you can read more about at the History Harvest at University of Nebraska-Lincoln's website.

At Harvest events, students digitize materials brought by community collaborators, record oral histories about the significance of those materials, and collect information to serve as metadata for a digital collection. In the weeks that follow, students edit and upload their materials to a digital site, and prepare exhibits based on further public collaboration, research, and connections between materials. The History Department at the University of Illinois offered such courses in Fall 2019 and Spring 2021, both of which involved collaborations with the C-U LGBTQIA+ community.

This exhibit demonstrates the profound importance that historical objects and documents saved by community members hold for our understanding of the past. For the LGBTQIA+ community in particular, these AIDS Memorial Quilt Panels provide a vital bridge between those who experienced the early years of the AIDS crisis and younger folks who want to know more about this history. Kathryn Oberdeck, Associate Professor of History, UIUC

Illinois Public Media and the University of Illinois Journalism Department

Journalism Professor Charles Ledford and Illinois Public Media Director of Community Content & Engagement Kim Kranich are leading a cross-disciplinary group of students to produce short films documenting the stories behind some of the quilt panels in Sewn in Memory.

According to Owen Henderson, one of the team members: “As a member of the queer community, I very rarely see our history represented, and I couldn’t pass up an opportunity to tell the stories of LGBTQ folks who are part of that history. I hope that this project helps to personalize and illuminate a part of our history that’s rarely talked about or taught, especially for people who thought of the AIDS epidemic as something that they’d never be affected by.” Owen Henderson is a junior from Trenton, Illinois, majoring in Journalism with minors in Spanish and Theater and is part of the filmmaking team.

About the AIDS Memorial Quilt

The AIDS Memorial Quilt is a living memorial to a generation lost to AIDS. Today, it comprises nearly 50,000 panels dedicated to 105,000 individuals who lost their lives to AIDS. The idea for the quilt was conceived in 1985 by San Francisco gay rights activist Cleve Jones and other activists in his circle who wanted to document the lives of friends they feared history would neglect. Their project, called the NAMES Project AIDS Memorial Quilt, was born.

People from across the country immediately began sending quilts to the NAMES Project workshop. On October 11, 1987, the quilt was displayed for the first time on the National Mall in Washington, DC, during the National March on Washington for Lesbian and Gay Rights. It was larger than a football field and included 1,920 panels. The quilt toured the country in 1988, adding 6,000 panels. In 1989, the quilt traveled the world and inspired similar commemorative projects in 20 countries. That same year, Cleve Jones, Mike Smith, and the NAMES Project Foundation were nominated for the Nobel Peace Prize.

In 2019, the National AIDS Memorial became permanent caretaker and steward of the Quilt. Today, the quilt comprises nearly 50,000 panels, commemorating 105,000 individuals. Forty years into the AIDS pandemic, more than 700,000 lives in the US have been lost to AIDS and more than 1.1 million people live with HIV.

For educational resources and an online exhibit of the entire quilt, you can visit the National AIDS Memorial website. 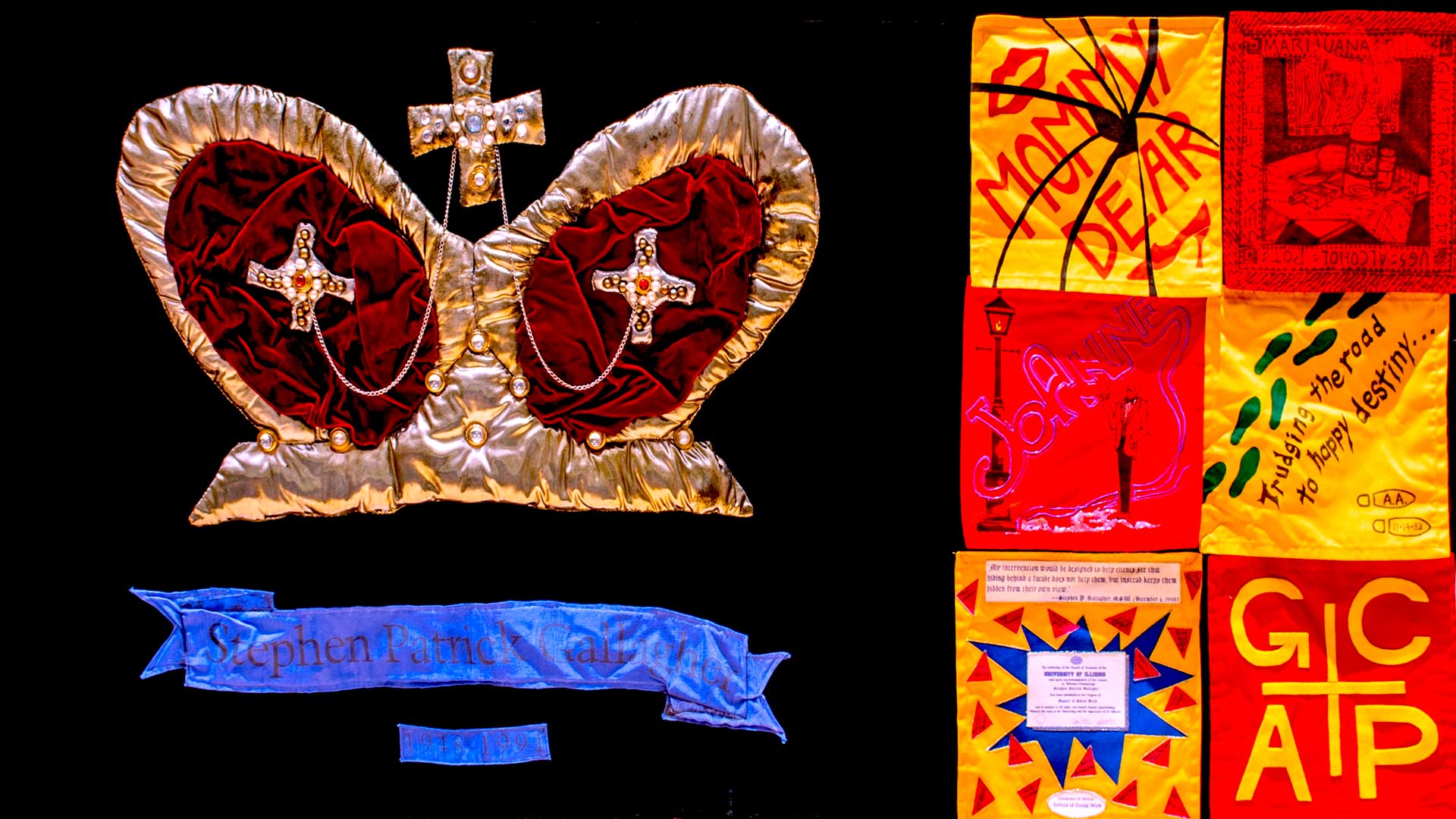 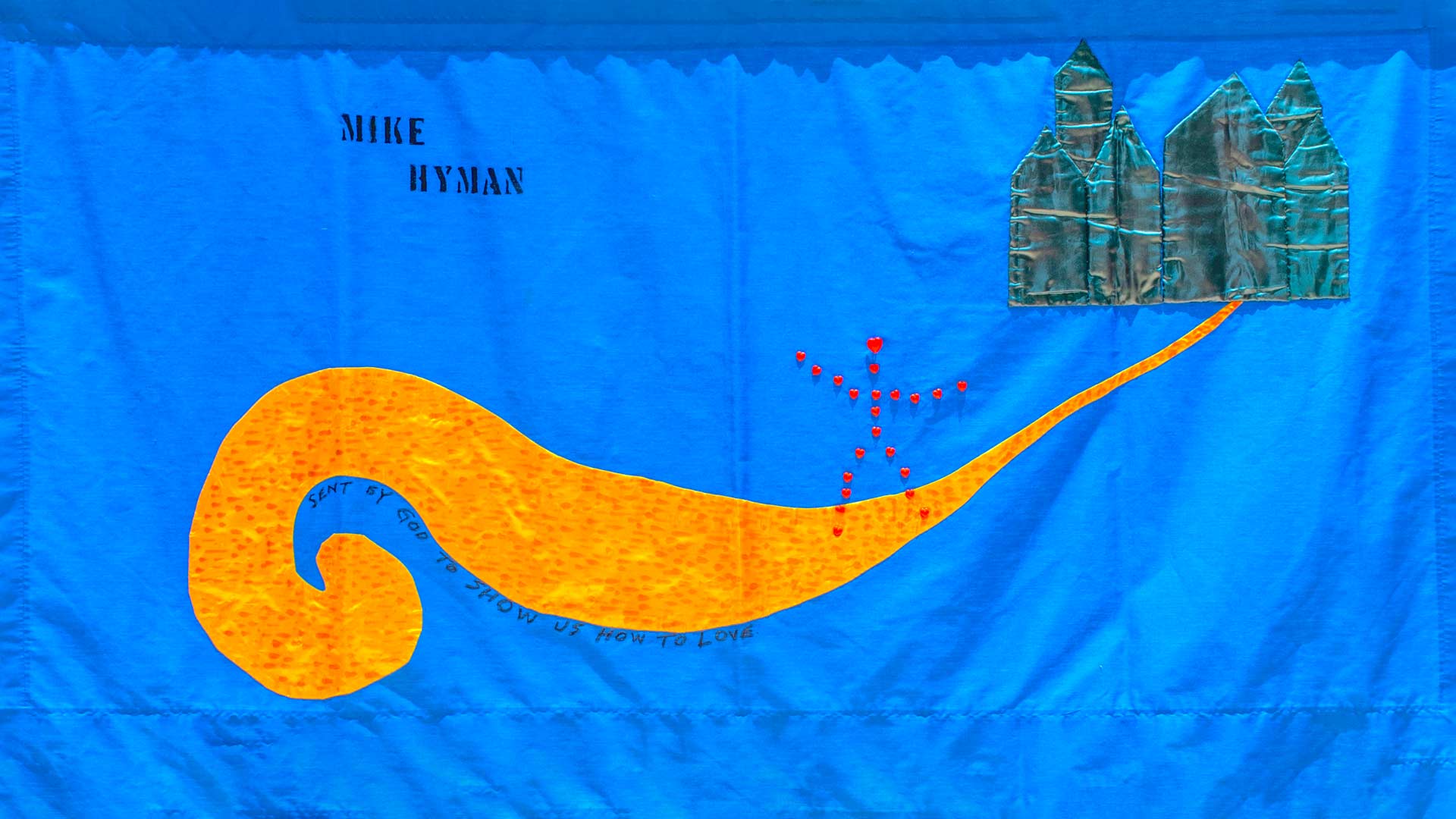 In Memory of Mike Hyman, by Stephen Gallagher, circa 1993. Property of GCAP, Urbana, IL. 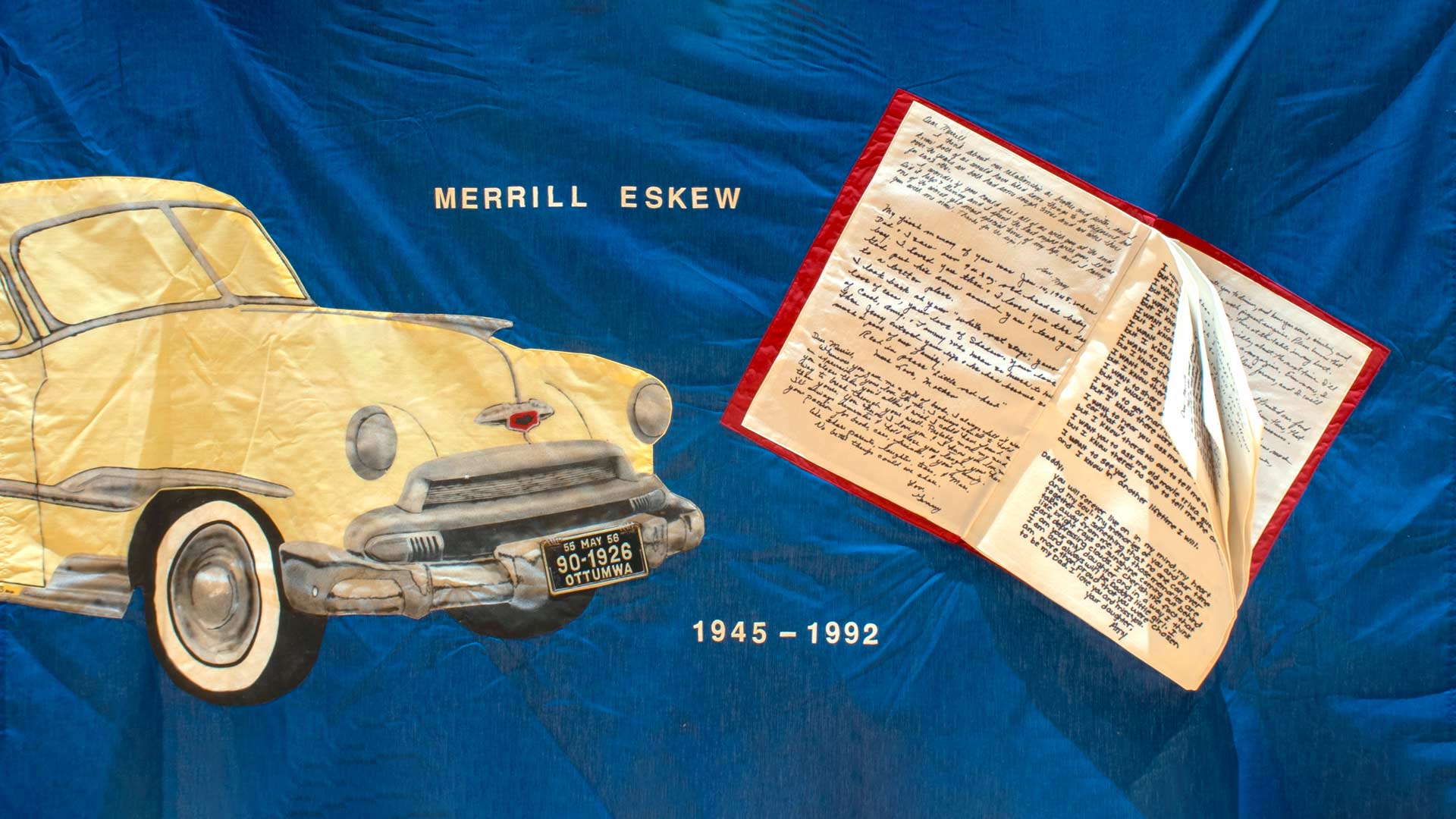 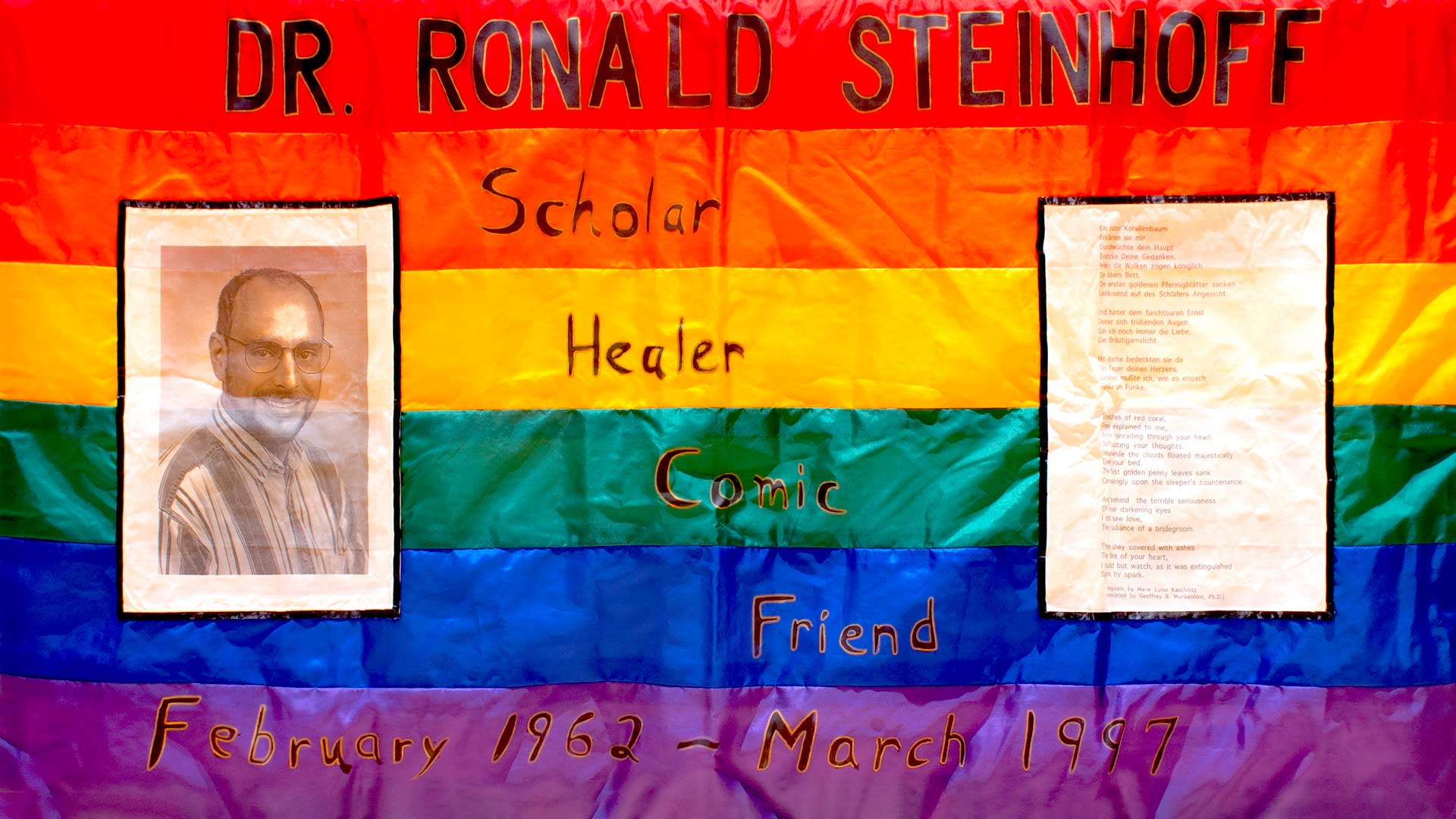