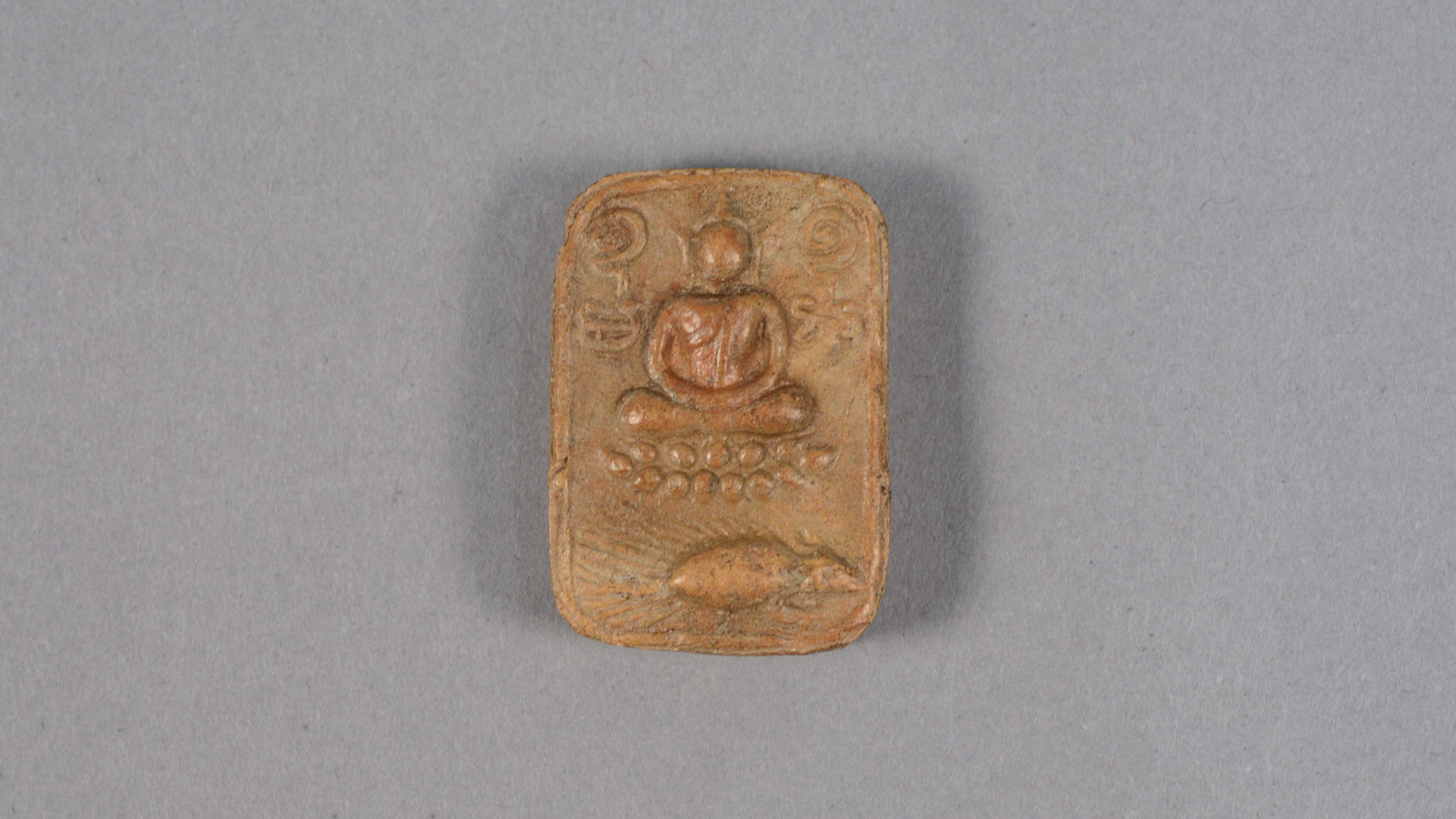 Illustrating the Buddha sitting on a porcupine, this terracotta amulet is of the Pan variety, a popular form that protects the wearer from danger. It resembles those made at Wat Bang Nom Kho, Ayudhaya by Luang Phor (“reverend father monk”) Parn, one of the ten guru monks worshipped in present-day Thailand. Thai Buddhist Amulets like this one function for many Thais as both reminders of Buddhist teachings and agents of the Buddha’s magical power. Conventional amulets depict the Buddha in a state of meditation, while others feature images of prominent Buddhist monks. Many Thais believe that Buddhist amulets endow wearers with supernatural faculties. Some amulets are thought to bring success and happiness. Others are believed to protect the wearer against disease, witchcraft, and misfortune.

Amulets have been an integral part of Thai culture since long before the advent of Buddhism. The very first amulets were made of simple, locally available materials such as wan (a group of plants many Thais believe to have medicinal properties, as well as the power to grant invulnerability). With the emergence of Buddhism and Hindu-Brahmanism in what is now Thailand, amulets and amulet production became more sophisticated. Henceforth, amulets were blessed by priests, monks, or learned laymen upon creation, and were frequently inscribed with yantra (sacred diagrams composed of graphic symbols). Though many such amulets were made and blessed by Buddhist monks, these amulets were not Buddhist amulets per se, as they did not include images of the Buddha or Buddhist saints.

The emergence of authentic Buddhist amulets in the late 19th century reflected a cultural shift in the role of Buddhism in Thai society. Around this time, members of Bangkok’s Thai elite began championing philosophies of humanism and individualism. Subsequently, their approach to Buddhism shifted toward the realities of the physical world and the pursuit of material—rather than solely spiritual—happiness. These modern values trickled down the avenues of Thai society and indirectly reinforced belief in the supernatural powers of amulets. The Buddha and his devotees came to be seen as saviors who possessed the ability to bring one good fortune. Long considered an image for public worship, the Buddha became a personal talisman. Before long, prominent monks began producing amulets of their own and Buddhist amulets began appearing in earnest.

These days Buddhist amulets are big business in Thailand. Many Thai Buddhists collect amulets and amulet markets can be found in towns across the country. Amulets are advertised in magazines devoted entirely to the trade, and, increasingly, amulets can be obtained online. Alternatively, newly created amulets can be obtained from temples simply by way of donation. Frequent religious holidays, anniversaries, and royal celebrations ensure that new amulets are constantly added to the already rich supply, and proceeds usually go toward charitable causes. Out of respect for the autonomous power of amulets, Thais rent amulets rather than purchase them, using the word chaw (“renting” or “hiring”) rather than sue (“buying”). This terminology demonstrates that one can never actually own an amulet; instead, one merely enjoys the opportunity to take advantage of an amulet’s power temporarily.