The main purpose of these containers was the protection of the corpse from scavenging animals and tomb robbers. They also served an important religious role through their shape and decoration, which changed and developed over the whole of ancient Egyptian history. The following is a very brief description.

Mummy cases were New Kingdom boxes that fit between the mummy and the coffin. They were made in two styles: a box and lid like a coffin, or a box with doors in the back that laced closed. Mummy cases were made of cartonnage, a lightweight material made from waste papyrus and linen covered in plaster. The cartonnage material allowed the case to be molded closely to the outline of the mummy; it was also a wonderful material to paint on. Mummy cases were elaborately decorated with a variety of religious elements.

Early tombs were considered the eternal dwelling places of the deceased, and the earliest coffins resembled miniature homes in appearance. They were made of small pieces of local wood doweled together.

By the Old Kingdom, coffins were rectangular boxes with flat lids. They were painted and inscribed in hieroglyphs with four important features: the deceased's name and titles; a list of food offerings; a false door through which the ka could pass; and eyes through which the deceased could see outside the coffin. The body was placed in the coffin on its left side, so its face would be directly lined up with the painted eyes on the coffin's side.

By the Middle Kingdom the coffin was considered a miniature tomb, and it was decorated with many of the items that had formerly adorned the walls of the tomb. The goddesses Isis and Nephthys were painted as guards at the head and foot of the coffin. The inside floor of the coffin was painted with Nut, Isis, Osiris, or the Djed pillar (Osiris's backbone). The sides bore the four sons of Horus and other deities. Horizontal inscriptions gave not only the owner's name and titles, but also a prayer for offerings. Vertical inscriptions were prayers to the divinities on behalf of the deceased.

Around 1650 BCE rishi coffins were popular in the city of Thebes. These coffins were distinctive because the bodies portrayed on the front were covered with feathers from shoulders to feet. These feathers represented the wings of Isis and Nephthys.

During the New Kingdom, coffins and mummy cases could be purchased ready-made. Once purchased, the owner's name and titles could be filled in the blanks left in the inscriptions. The ready-made mummy cases were created by molding the container around disposable cores of mud and straw.

Depending on the period and the wealth of the individual, it was fashionable to be buried in either one, two, or three different coffins. Multiple coffins would be nested one inside the other. 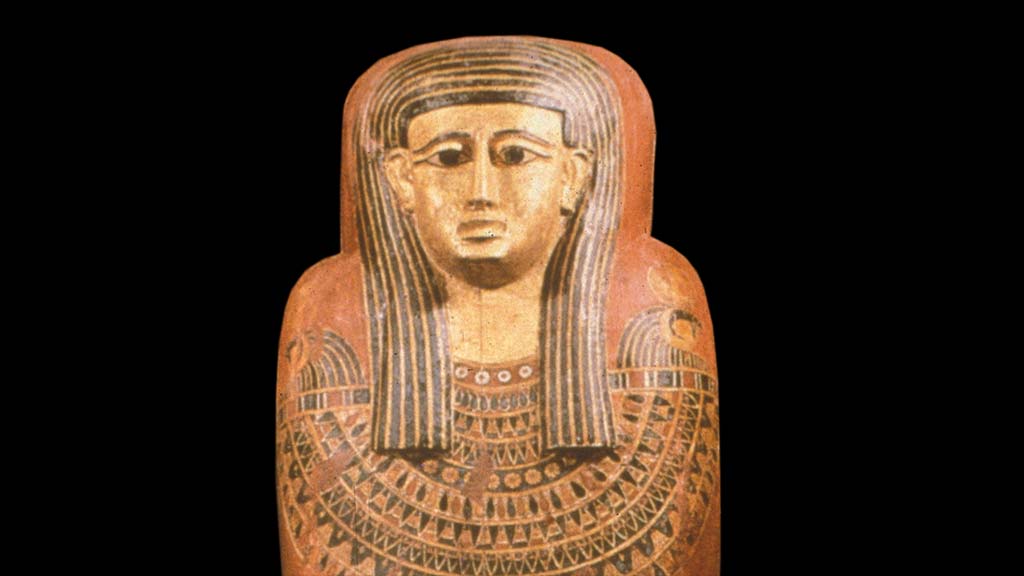