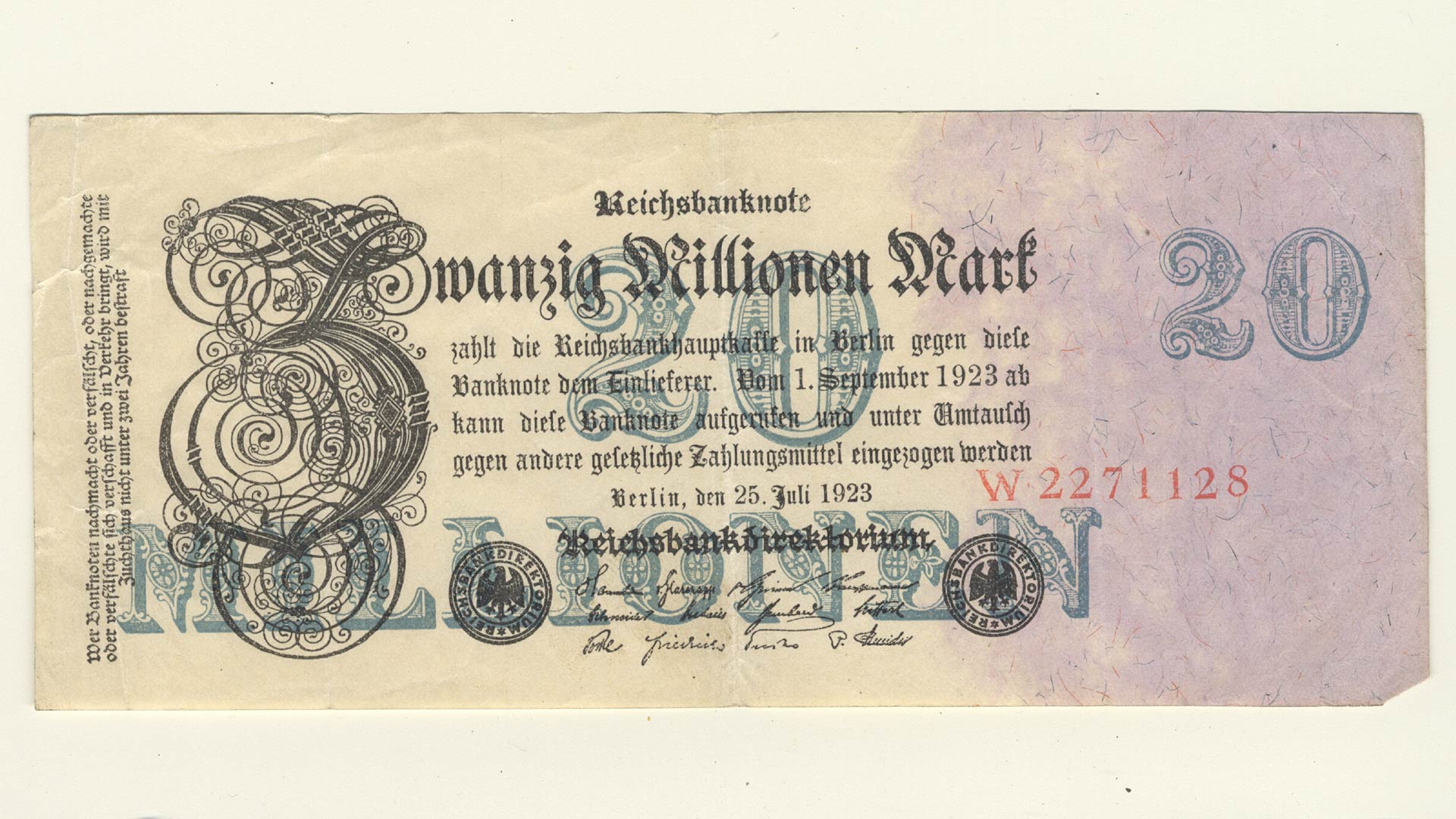 In the early 1920s, Germany was in a period of hyperinflation. Bank notes, such the ones shown here from the Spurlock Museum’s collection, were printed at fever pitch by the government in an effort to keep up with a currency that was spiraling down in value.

Germany was in crisis in the years following the end of World War I. In the November Revolution of 1918, Kaiser Wilhelm II’s monarchy was toppled after masses of sailors, soldiers, and workers took control of Germany’s cities, furious at their material conditions and demanding an end to the war. As millions of German soldiers streamed home from the Western Front, they joined the growing pool of the nation’s unemployed, some turning into armed forces for the revolutionaries of the far left, some backing the new liberal government, and some others joining the counter revolutionaries who wished to see the monarchy restored. By February of 1919, at least 1.1 million Germans were unemployed, a number that would continue to rise. The next few years saw waves of revolutionary and counter-revolutionary violence on the streets of most of the cities of Germany. The liberal coalition government desperately attempted to maintain its versions of peace, stability, and order against contrasting visions for the country offered by far-left communists and counter revolutionaries of the far right.

Coupled with these internal crises, the new republic (commonly referred to as the Weimar Republic) was saddled in May of 1919 through the Treaty of Versailles with unprecedented amounts of war debt. Reparations equivalent to half a trillion contemporary US dollars were to be repaid to the victorious Allies. The goods produced in factories, livestock, and raw resources such as coal, iron, grain, and lumber began to be expropriated from Germany as repayment. Throughout this loss of physical and financial resources, the Weimar government continuously printed banknotes with little to back them. This process began to devalue the German currency.

The German economy began to buckle under the weight of these external and internal pressures. As the first repayments were made to the Allies in the early 1920s, the value of the German mark sank drastically, and a period of hyperinflation began. In early 1922, 160 German marks was equivalent to one US dollar. By November of 1923, the currency would depreciate to 4,200,000,000,000 marks to one US dollar.

The hyperinflation made day-to-day survival arduous for ordinary Germans, most of whom were members of the working classes employed in factories. The exponential price rise made it difficult to obtain even basic goods like bread, meat, and coal to heat homes. Pay received one day was often worthless the next. There are numerous accounts of Germans rushing to the bakery or to the store during their lunch breaks, because to wait to the end of the day would see their money depreciate so much that it could not buy the goods they needed. Banknotes that were once very valuable became worth only fractions of a Pfennig (penny), to the point that some began using them as wall paper or even as toilet paper. As the communist novelist Hans Marchwitza wrote in his novel about the revolutionary violence and inflationary period, Sturm auf Essen: “A hated, cursed war was followed by a hated, cursed post-war.”

The period of hyperinflation continued until 1924, when the coalition government of the conservative foreign minister Gustav Streseman introduced a new temporary currency (the Rentenmark), renegotiated debt repayments to the Allies through the Dawes Plan, and secured new American loans to finance government institutions.

The revolutionary years and the hyperinflation are today remembered as one of the most tumultuous periods in modern German history and still impact German fiscal policy. This economic instability is also remembered as being coupled with other types of turmoil: the right-wing myth that the liberal revolutionary government “stabbed in the back” the army by calling it home while it was supposedly undefeated in November of 1918; constant street violence between counter revolutionaries, communists, and government security forces; and the onset of the Great Depression in 1929. These factors delegitimized the Weimar Republic and liberal-bourgeois democracy in the eyes of some Germans. They empowered the forces of the far-right, including the Nationalsozialistische Deutsche Arbeiterpartei (NASDP), more commonly known as the Nazi Party, which would win the 1933 elections.