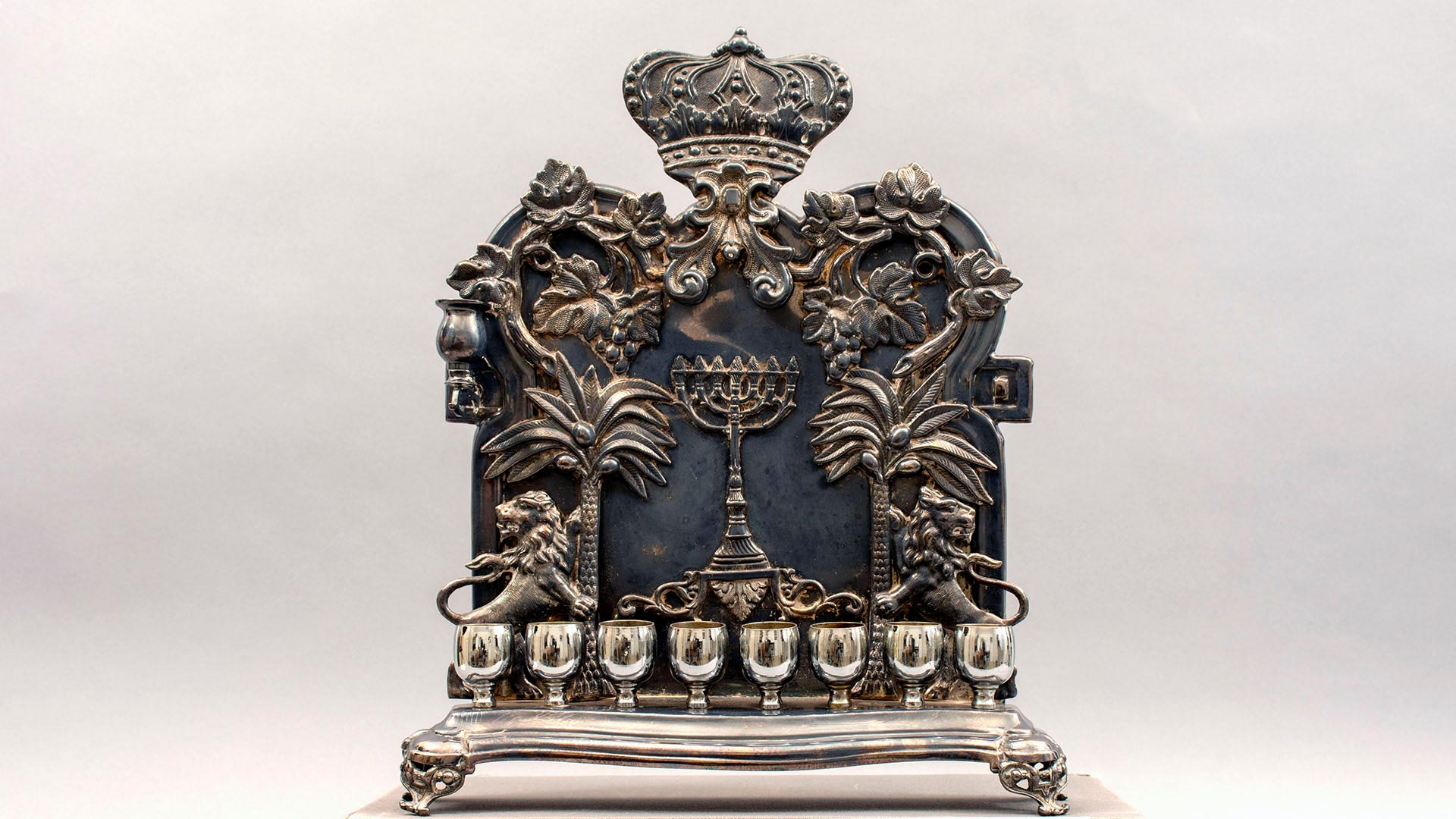 For more than 2000 years, the menorah has been one of the most important symbols in Judaism, a central motif in the consciousness of the Jewish people. Menorahs are seen on tombstones, mosaics, ceramics, and other decorative surfaces. The menorah was first described in the Book of Exodus, where YHWH, or God, gave Moses detailed directions for its construction; but when Moses cast gold into a fire, the menorah formed itself.

One menorah in the Spurlock Museum’s collection is notable for the number of Jewish symbols represented. The backplate of this mid-20th century Polish Hanukkah lamp, with 8 vase-shaped oil burners and a candle holder, is centered by a Menorah surmounted by a crown and surrounded by a decoration of grapevines (however it is missing an oil jug). Below the grapevines stand 2 palm trees and lions.

The image of the menorah here represents the original lamp in the Temple of Jerusalem. The symbol of the crown has historically been used in a number of ways in Judaism; in this instance, it may illustrate the crown which was worn by the High Priest during the Temple period. The symbol of the grapevine in Jewish tradition and ritual dates back to the 1st century CE and is representative of many places and things, including Jerusalem and the Torah.

In Judaism, palm trees, or date palms, are symbols of prosperity and triumph, and have appeared in iconography in sculptures ornamenting the Temple of Jerusalem and in the sculpture of many synagogues. The lions appear as heraldic supporters, and may represent the Lion of Judah, a Jewish national and cultural symbol traditionally standing for the Israelite tribe of Judah.

Today, synagogues keep a lighted menorah near the Torah scrolls, representing the Temple in Jerusalem and its 7-branched gold menorah. It is lit daily from fresh, consecrated olive oil and burns from evening until morning. Both original and modern menorahs symbolize divine wisdom, as the Torah is compared to a light.

The menorah is also commonly associated with Hanukkah, the festival of light. Hanukkah celebrates the victory of the Jews in the 2nd century BCE, over Greek armies in Israel. After liberating Jerusalem and reclaiming the Temple, Judah and his followers found only one day's supply of olive oil left to fuel the flames. A miracle occurred when the flame burned for 8 days, giving them enough time to make more oil to keep the menorah eternally lit.

Jewish people celebrate Hanukkah over 8 days in late November or early December. On each night, a candle is lit in a special, eight-branched menorah called a hanukiyah. The candles are placed in a straight line so anyone can easily see how many flames are burning, indicating which night of Hanukkah it is. A 9th candle, called a shammash, is used to light the others, and is set aside in order to distinguish it from the others.

This ritual represents the revival of Jerusalem’s Temple menorah and an exile of the past. A special prayer or hymn, the Ma'oz tsur, is recited during the lighting. While the candles burn, it is a time for songs and games, including playing with a four-sided toy called a dreidel. Other customs include the giving of gifts, especially to children, and decorating the home. In the past, Hanukkah had been considered one of the less important Jewish festivals, but today it is celebrated in many parts of the world.

Previous Post: Change is Underway in the European Cultures Gallery
Next Post:All Eyes on Eyrops