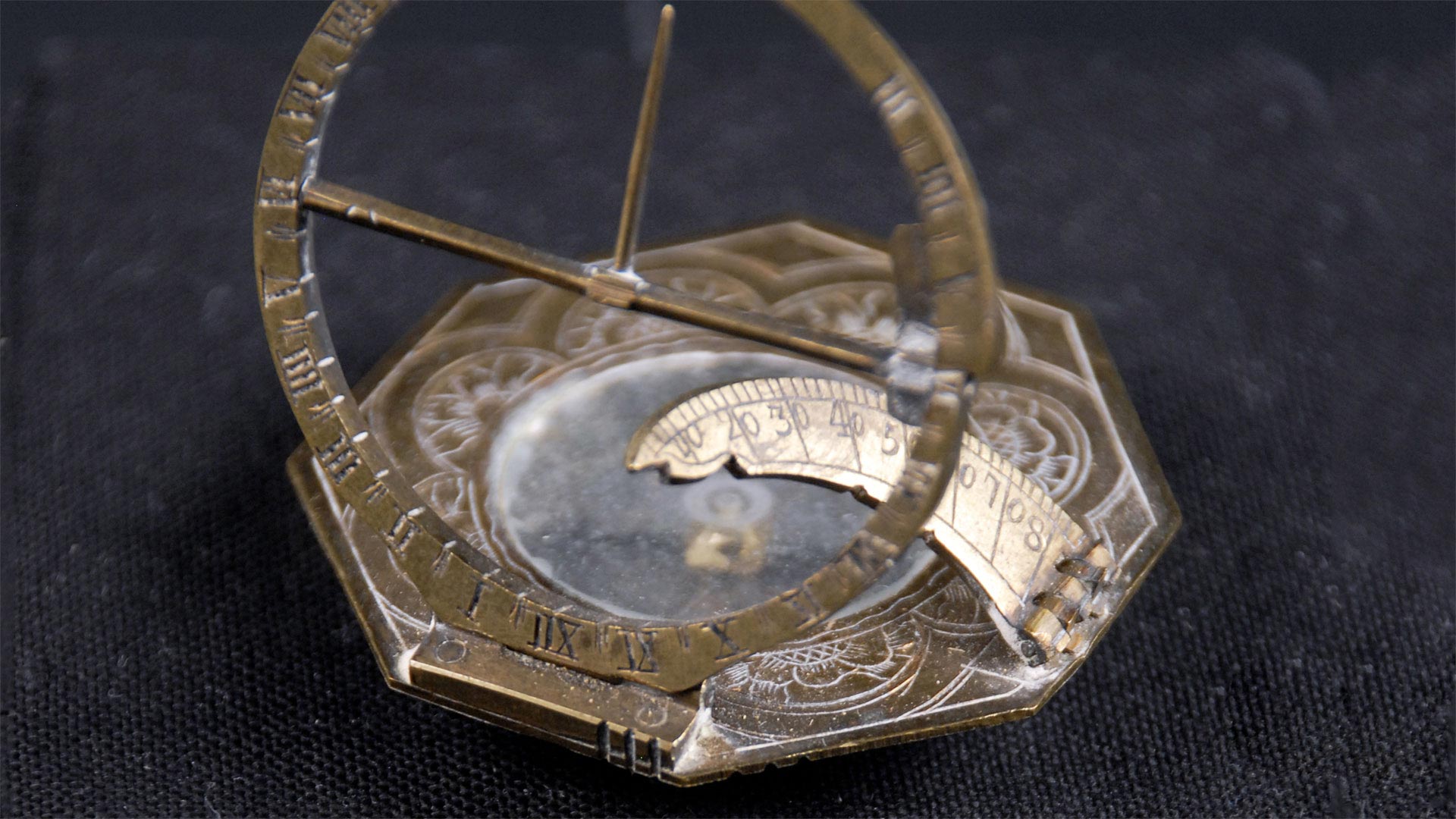 This combination sundial and compass (1930.04.0001), most likely a product of 17th-century France, functions through two prominent scientific technologies—one that measures time and another that measures location. In combination, these two measurements can provide a complete understanding of a person’s physical and temporal place in the world. Grasping these concepts was of great interest to Europeans at the time of this instrument’s manufacture.

Throughout the 15th to early 17th centuries, an era deemed the “Age of Exploration,” European nations developed a fervent interest in travel as a means to expand trade routes and develop new trade partnerships. It is during this time period that Europeans discovered the Americas and established large-scale colonial networks. The heavy reliance on scientific instruments for ship navigation during this period increased interest in compass and sundial technologies.

Though this particular instrument was not manufactured for reliability during long-term sea voyages, it enabled the user to be an independent traveler. The small pocket size and protective latching leather case make it conveniently portable. The detailed ornamental metal border and decorative octagonal shape, however, imply that it was not made solely for utilitarian purposes. It also served as a symbol of high social status for the owner.

The History of Sundial Technology

Sundials are often considered the first scientific instruments, dating back as early as 3500 BCE in Egypt. Sundials use the positions of shadows produced by the sun to determine time of day. Ancient Egyptians initially used shadow clocks or obelisks, which are monumental vertical columns that cast shadows of various lengths and positions depending on the location of the sun. Over time, this early sundial technology was used by other cultures—including the Chinese, Greeks, and Romans—where it was further refined. In addition to the use of an object (technically a “gnomon”) that produces a shadow, more complex sundials rely on a flat dial plane on which times of the day are marked, similar to the face of a clock.

Sundials remained the dominant time-keeping tools until well into the 18th century, when more convenient clock and wristwatch technologies were first developed. These new mechanisms, unlike sundials, could be used indoors and at night without the presence of natural sunlight. However, during the decades of their initial development, clocks depended on sundials against which they could set and measure “true” time.

The History of Compass Technology

Compass technology is used to indicate physical direction. It dates back to the Qin Dynasty in China from 221 to 206 BCE when the Chinese first discovered the magnetic properties of lodestones, naturally occurring pieces of iron oxide which attract iron. When a piece of lodestone is freely moving, it reacts with the Earth’s natural magnetism. The Chinese developed this concept further into the magnetic compass by the 12th century, which was then brought to Europe likely through the Silk Road trade network. In a magnetic compass, a needle is magnetized by a lodestone and positioned upon a pivot around which directional bearings—north, south, east, and west—are marked. The needle reacts with the Earth’s magnetic field and aligns itself pointing toward magnetic north, thus providing a fixed reference point for the compass’s user.

There have been further technological developments in accuracy since the tool’s initial development. For example, the “north” to which a compass needle points is not precisely the same as the geographic North Pole, and it is also not a static point. Scientists now understand that the Earth’s polarity does not run parallel with longitude lines and shifts gradually over time. The magnetic declination angle—the angle of error between magnetic north and true geographic north—is needed to determine an exact location. Because of this complication, large modern-day ships and airplanes use gyrocompass technology, a system of measurement developed in 1852 that works in conjunction with the Earth’s rotation rather than its magnetism. Additionally, GPS (Global Positioning System) technology, developed and refined in the 1990s, is increasingly used in navigation today. This technology uses analysis of satellite signals and time delays to pinpoint an exact position on Earth. Compass technology has not become obsolete for contemporary use. It can be used in conjunction with a GPS reading to provide direction at a given location. Because a compass is powered by an automatic response to Earth’s magnetism, it also serves as a general standby when wind, state of visibility, or lack of an energy source inhibits the use of more dependent technologies.

Other navigational compasses in the collection

This article was originally published on 3/7/2008, but is presented here with expanded photography and textual corrections.

Previous Post: We have tangled tassels to talk about!
Next Post:It's Flag Day!