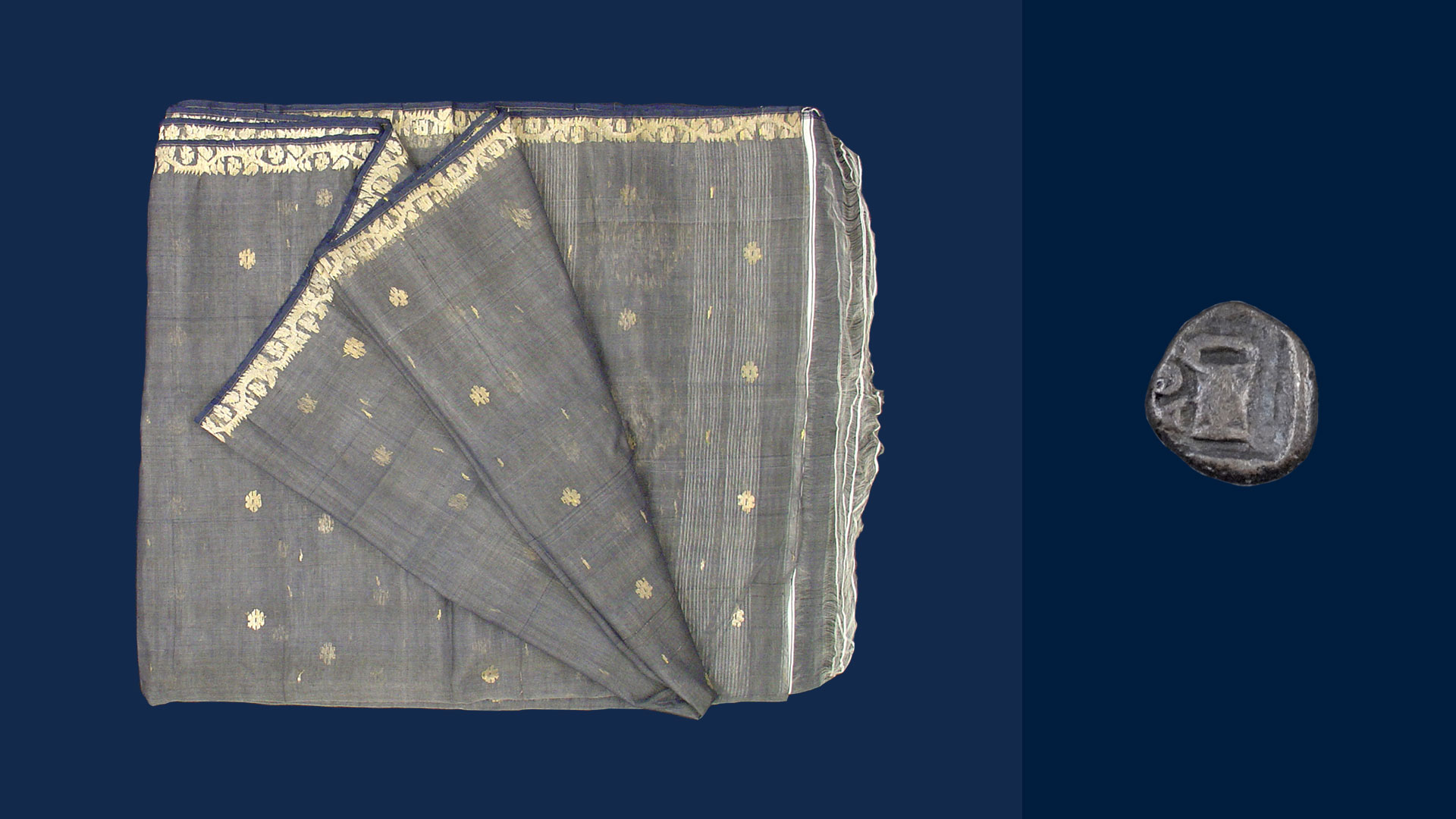 These two objects are the biggest and smallest in our collections. The sari is the biggest, at over 36 feet long–2,500 times longer than the coin, which measures only .17 inches across! Pairing the sari and the coin is just one way to represent the diversity of our artifacts. Look for other intriguing contrasts in the pieces you see in the galleries: heavy and light, old and new, from far away and very near...the combinations are endless.

Very little information accompanied this piece when it was donated to the museum in 2005. In the summer of 2010, several members of the local South Asian community volunteered their time and expertise to help museum staff identify several dozen saris in our collections and learn more about their manufacture and use. At that time, it was suggested that this piece might come from a city called Chanderi in the state of Madhya Pradesh in the center of India.

Chanderi saris are historically made of a finely-spun local cotton to produce a fabric with a very high thread count. Chanderi pieces are traditionally light and translucent, and they enjoyed royal patronage from the Mughal courts in the 1700s. The metallic threads are called zari and are made by wrapping cotton or silk threads with thin, flattened fibers of gold or silver. Weavers in this region use zari to make designs along borders, though some saris, like this one, have small motifs in zari throughout. Chanderi saris are probably the most famous type of a broader category of saris called shallu, which refers to fine cotton muslin and/or silk woven with zari.

The sari is a familiar piece of clothing to the billion-plus citizens of India, as well as members of other South Asian cultures and their descendants who live across the globe. Depending on what you like to wear, you might be unfamiliar with clothing that is made from a single piece of fabric that is draped, folded, and/or tucked, rather than cut and sewn into just one set shape. In the museum, you can easily find examples in the Ancient Mediterranean: "The Dawn of the Individual" permanent exhibit. You may have heard of togas, and Ancient Greek and Roman cultures had many different styles of untailored garments that you can see on the statues, reliefs, and painted vases.

The coin—in an amount called a half obol—had the buying power of about half of a loaf of bread. During funerary practice, an obol might have been placed in a deceased person’s mouth to assist them in the underworld, payment for the mythical figure Charon to ferry them across the River Styx to the land of the dead. The letters on the reverse (shown in the image), Α (alpha) and Θ (theta), might have once been followed by an Ε (epsilon), forming an abbreviation for the ancient Greek word for “Athens.”