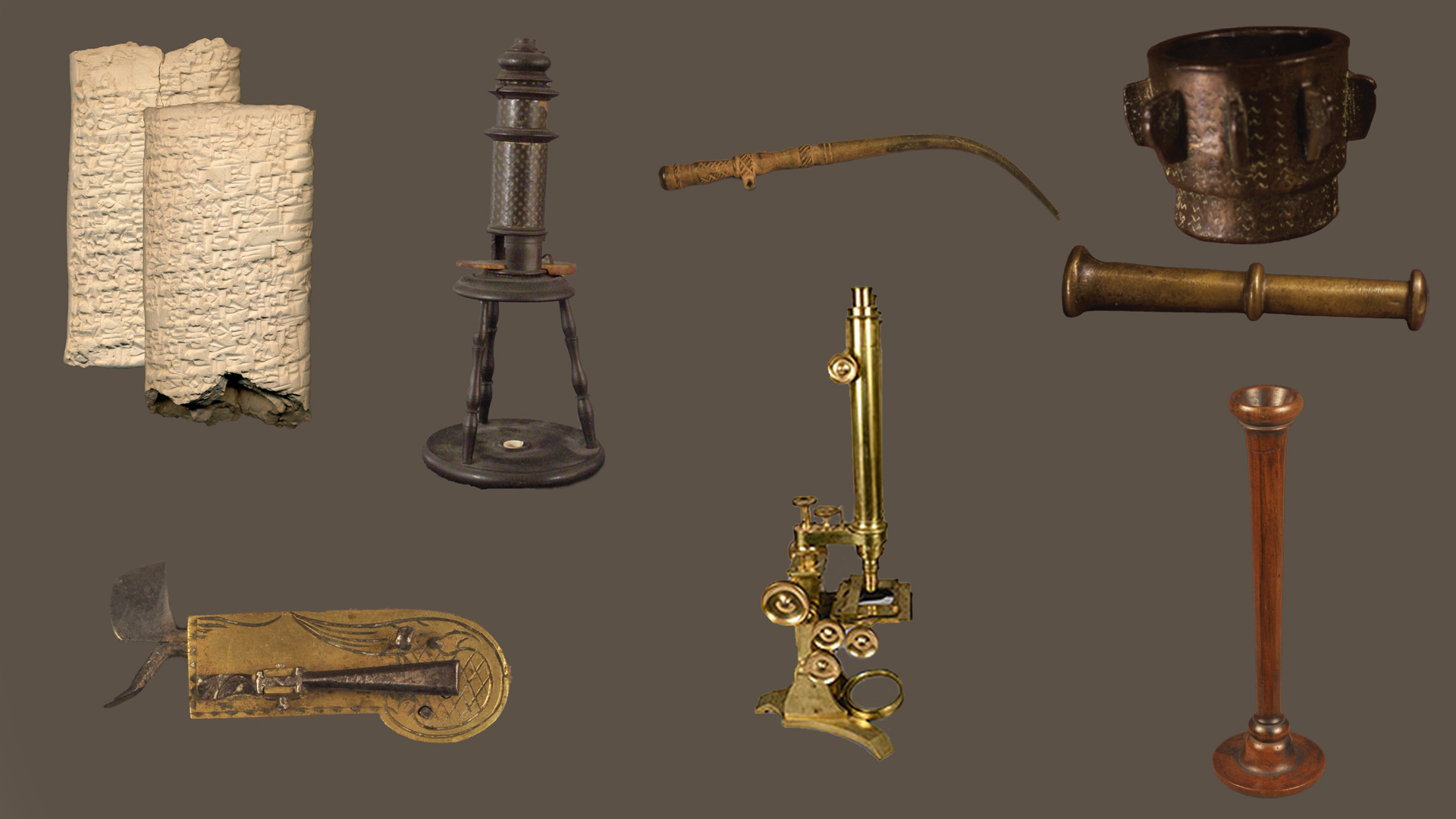 Medical Artifacts at the Museum

Throughout history, humankind has had to battle disease, viruses, and ill health. Different medical instruments, technologies, and interventions have been developed in response to the concerns of the time. As we witness the search for technologies and solutions to COVID-19, we thought an article published in our Fall 2014 magazine by Allan C. Campbell, MD was particularly relevant. In this piece, Dr. Campbell highlights different medical artifacts from different time periods in our Collections and their relevance to modern instruments.
Download Fall 2014 Magazine (PDF)

Among the treasures of the Spurlock Museum’s artifact collection are many items of medical significance. I have chosen a selection to represent various time periods and progress in our understanding of medical science. All can be viewed on our website.

The most ancient of these items is a cuneiform tablet (1913.14.1465) from the First Dynasty of Babylon (1895–1712 BCE) containing a list of medical conditions (on display in the “Early Writing” case in the Mesopotamia exhibit), followed by an incantation that a priest would recite to cure any of the conditions. The tablet was first published by the noted Assyriologist, Albrecht Goetze in 1951 and is part of the Museum’s extensive collection of 1748 cuneiform tablets. Benjamin R. Foster published a translation as follows:

(Incantation:)
Whom shall I send with an order
To the daughters of Anu, seven and seven,
The ones whose juglets are of gold
whose pots are of pure lapis?
Let them bring their juglets of gold;
Their pots of pure lapis;
Let them draw pure waters of the se[a];
Let them sprinkle, let them extinguish
Congestion, fever, dizziness, pox
(and the rest of the medical conditions).

Foster notes that “incantations and magic rituals were as important in ancient Mesopotamian medical practice as pharmacopoeia and surgical procedure [were]. Some incantations were used for a specific complaint, some for a variety of illnesses.”

This surgical probe (1914.05.0130) belongs to the Ptolemaic period (4th to 1st centuries BCE), the time of Greek rule over Egypt, after it was conquered by Alexander the Great. It is a cast bronze device, some 15.8 cm in length, and was used to probe wounds in search of projectiles and bone fragments, as well as to explore fistulae. Similar probes were used for centuries, from ancient times through the 19th century. A relief on the wall of the temple at Kom Ombo in Egypt shows a box of surgical instruments, including probes like this one, as well as knives, saws, spatulas, hooks, and forceps.

A number of mortars and pestles for compounding medications are in the Spurlock’s collections, such as this mortal and pestle from medieval France (1929.11.0002). The compounding of medications the process of preparing a dosage for the specific needs of a patient—as prescribed by a medical practitioner—has been documented since ancient times, evidenced by the fact that Egyptian temples were said to have had laboratories in which medications were prepared and stored.

The Museum holds multiple sets of instruments that were used to bleed patients. The bloodletting knife (1931.05.0002C) shown here comes from 18th-century Germany. Bloodletting was practiced in numerous cultures of the ancient and medieval world, including Greece and Rome, and continued in Europe and the United States well into the 19th century. It was thought that many diseases were caused by too much blood or “plethora,” and that bleeding would balance the humors. A more scientific version of bloodletting, called phlebotomy, is used today to reduce the red blood cell volume for conditions such as polycythemia vera, hemochromatosis, and porphyria cutanea tarda.

The earliest microscope at the Spurlock Museum is this microscope (1998.19.2747) from Great Britain belonging to the 17th century. The first compound microscope, which utilizes two lenses to magnify small objects, was most likely developed in the Netherlands in the late 1500s by father and son Hans and Zacharias Jansen. In 1609, Galileo Galilei also developed a compound microscope. At first considered just a toy, scientists began to recognize its value for biological research by the mid-17th century.

This brass binocular microscope (1998.19.0250) was made in Great Britain in the 1860s. The binocular type of microscope dates back to 1677, when a Capuchin monk named Chérubin d’Orléans applied developments to the microscope that had been made for binocular telescopes. It allowed for a researcher to examine tiny objects with both eyes together, often a great improvement. Although modern research microscopes have moved in much more sophisticated technological directions, most people still gain experience with the binocular microscopes found in high school science classes.

This 19th-century wooden stethoscope (1995.06.0003) was manufactured by the noted maker of surgical instruments, F.A. Eschbaum of Bonn, Germany. Eschbaum’s establishment was very highly regarded throughout Europe, and in fact was appointed as the official supplier of medical instruments for the imperial court of the Kaisers. The stethoscope was first invented in France in 1816 by Rene Laennec at the Necker-Enfants Malades Hospital in Paris. The design of our stethoscope owes much to that original instrument. This model was used by placing one end on the chest of the patient and putting one’s ear to the other end. The binaural stethoscope, with which most of us are familiar, was invented in 1851 but did not replace the simpler monaural ones until the late 19th or early 20th century.