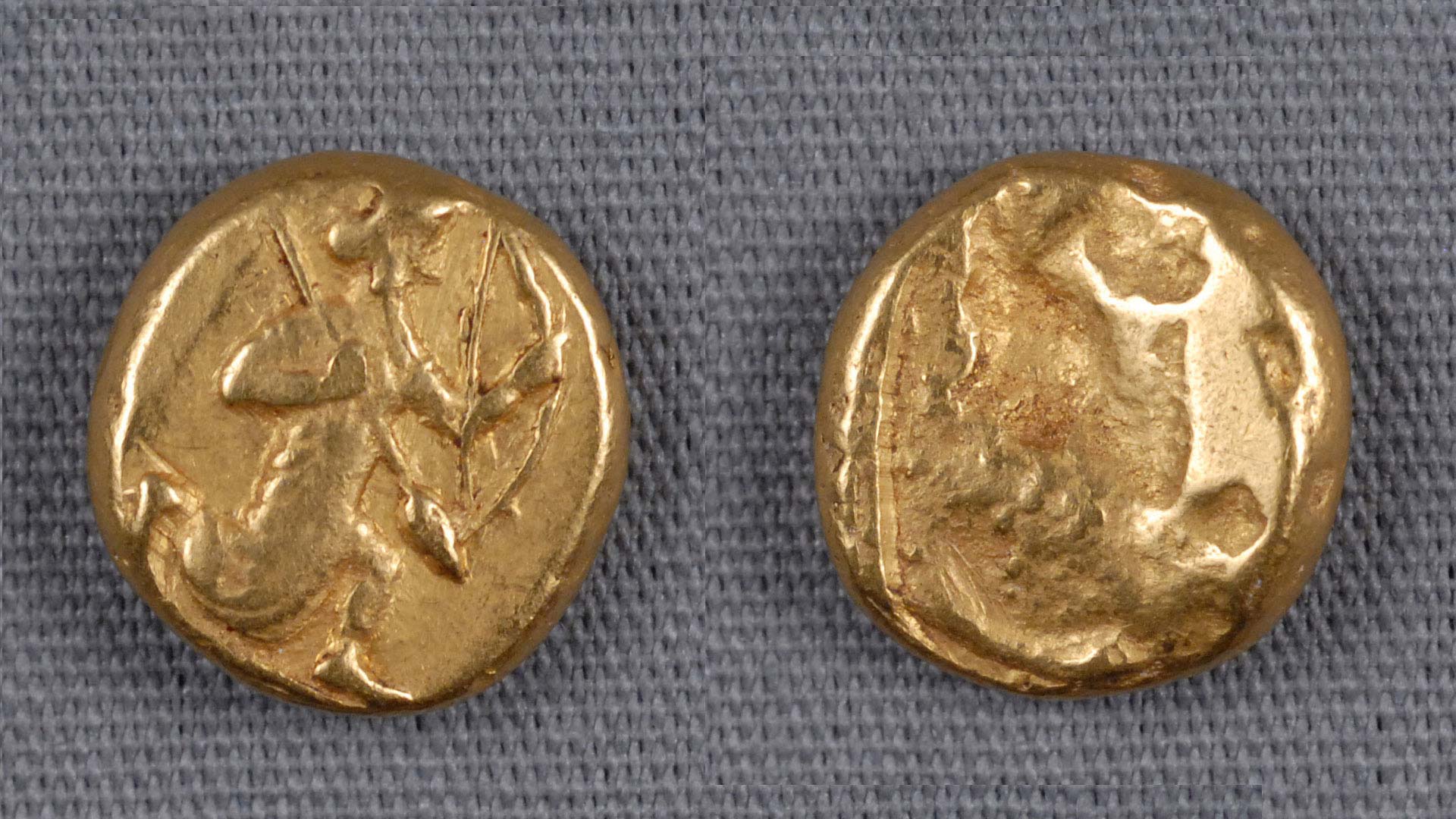 This Persian daric originates from the ancient Persian Achaemenid Empire (550–330 BCE), which stretched from its Persian homeland in modern-day Iran eastward to India and westward across the Middle East and northeastern Africa. Darius the Great, the third ruler of the Persian Empire, famous for his attempted conquest of Greece and subsequent defeat at the Battle of Marathon outside of Athens in 490, was the first to mint the daric at the end of the 6th century. The ancient Greeks thought that the name "daric" was derived from Darius's name, though many modern scholars believe its name comes from the root of the Old Persian word for gold (dari-). Regardless, the daric quickly became known throughout the ancient world for the remarkable purity of its gold. Together with the silver siglos, or shekel, this coin formed the monetary standard for the Persian Empire, though unlike the siglos, which was used on a more local basis, the daric is known to have circulated far and wide in the ancient Mediterranean world.

On the daric’s obverse (front side) is the image of the Persian king, known to the Greeks as the Great King, dressed in a long tunic. He kneels, holding a drawn bow in his left hand and long spear in his right. Because of this image on the coin, the Greeks gave the coin the nickname "the archer." The reverse (back side) shows a distorted, oblong, irregular incuse (impression). The coin’s iconography emphasizes the importance of the king as a warrior and leader for the Persians. Thus, apart from the monetary value of the daric, one of its functions was to assert the Great King’s authority and power, both among the satraps, or ruling Persian nobles, and non-Persian peoples, such as the Greeks.

The daric’s origins can be traced to the Persian conquest of the kingdom of Lydia in Asia Minor by Cyrus the Great in around 550. Lydia had been the first ancient state to introduce the practice of minting coinage. Soon, under Darius, the Persians themselves began this practice, and Darius established the leading mint in Asia Minor at the previous Lydian capital, Sardis. During the next two centuries, the gold daric and the silver siglos set the standards for coinage in terms of weight and value. After the conquest of the Persian Empire by Alexander the Great in 330, production of the daric quickly declined. Alexander and his immediate successors had many of the existing darics melted down and recast as coins bearing their image, resulting in the relative rarity of the coin today. The daric thus rose and fell with the Achaemenid Empire itself