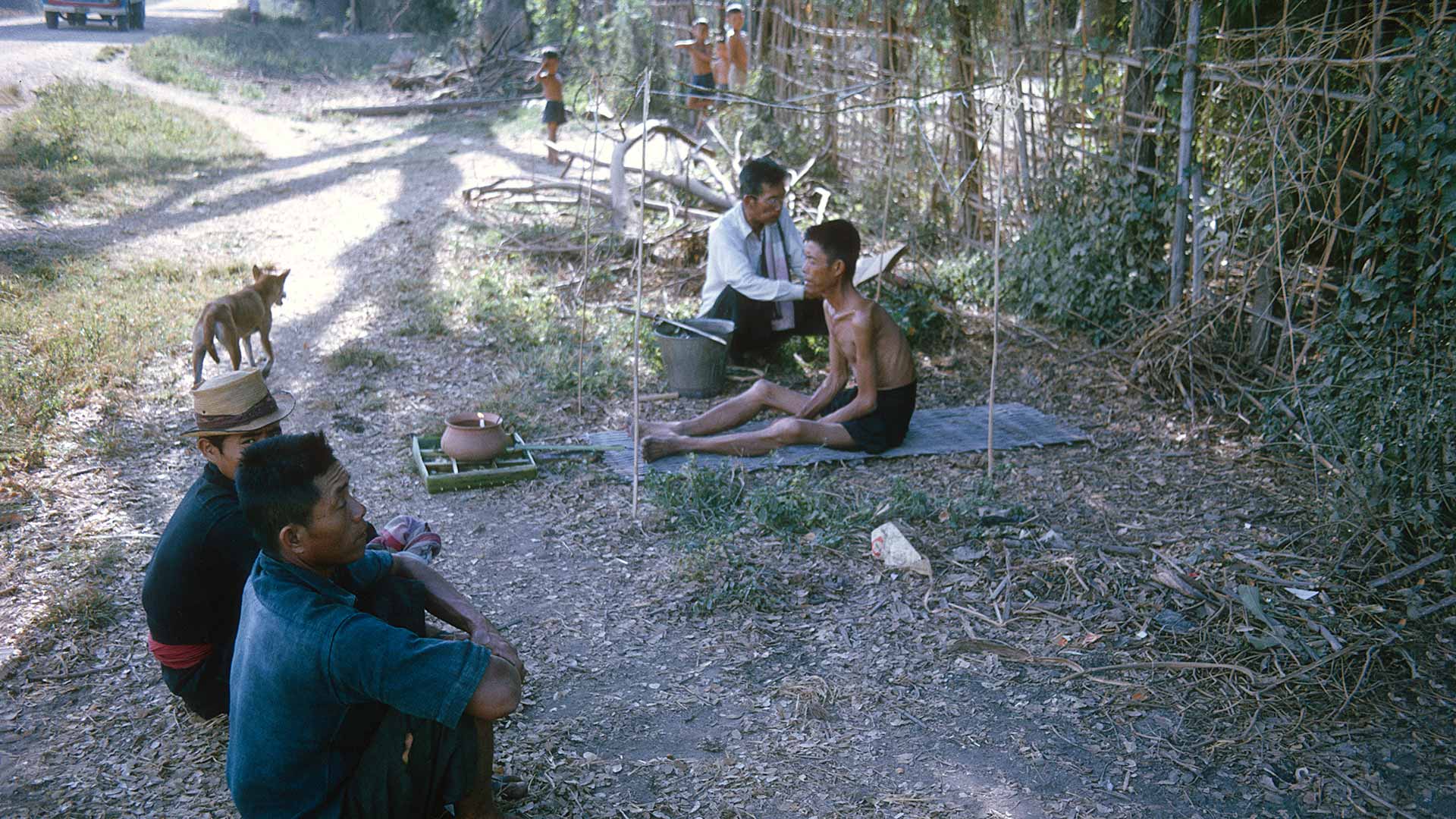 Though Buddhism is the official religion of Thailand and the king is its patron, other forms of spirit and other beliefs are found throughout the kingdom and are recognized as complementary to Buddhism. These beliefs range from spirit lords associated with places such as villages, mountains, or forests to spirits such as phii that can affect and afflict individuals. Dwellings where such spirits can reside are built in villages or near homes, and practitioners of various sorts may deal with them. Phii are believed to have characteristics not unlike humans: they can help or harm and be placated by gifts, and they may also have temperaments such as jealousy.

In the following story, I shall describe a case in which a man, who was believed to have been made ill from a spirit entering him, sought help from a former Buddhist monk known to have experience with such problems.

The Site of the Exorcism

The man and his exorcist were seated by the main road south from Chiang Mai to distant Mae Sarieng, in Chom Thong District.

The exorcist, a former Buddhist monk, helped the man to erect a small enclosure in which he was seated, located by a fence to his village. The enclosure was marked by four posts connected by a white string at the top. On each corner at the top of the posts were hexagonal star-like figures made from pieces of split bamboo, called chaleuw in Thai. Chaleuw serve to ritually protect places from attack by spirits. They may be found on granaries storing rice and on signs marking property boundaries in towns. They have widespread Indo-European historical roots and are similar in form and function to the so-called hex signs (German hexe, “witch”) seen in the U.S. on Pennsylvania Dutch barns, where they are believed to ward off witches' spells, the evil eye, or harm to farm animals.

The ill man sits quietly inside the enclosure on a mat made from split bamboo while the exorcist squats outside of it reading from a traditional Thai-style book. The man has been visibly ill; his body is emaciated, with exposed chest bones, and he has somewhat arched shoulders. He holds a black string, extending from his hands across a small bamboo bridge to a bamboo container. The container is divided into 9 sections holding various bits of glutinous rice (the Northern Thai staple), meat, and vegetables. On top of it sits an earthenware pot containing some eggs and a burning candle. The black string held by the man connects his clasped hands to the candle in the pot.

The exorcist has been reading gaathaa (stanzas) from the book he brought from its place in a temple library. This book is devoted to use in such rituals and has its parallel in one of the books on display in the Southeast Asia: "Crossroads" exhibit.

When he finishes reading, he takes small branches, dips them in the bucket of water at his side, and then stands and sprinkles the water over the ill man. This act is meant to nourish the spirit and lure it along the black string across the little bridge to the tray of food and into the earthenware pot. This ritual is termed laai phii ("driving out the spirit"). The exorcist then takes the machete he brought with him and he cuts the black string and blows out the candle. The phii is then ritually trapped in the pot when the exorcist covers it with some paper on which he has written some stanzas. He will then carry away and bury the pot at what he considers to be a suitable distance from the sick man and his village.

The following 4 photos show these actions in counter-clockwise order:

The Source of the Illness

The patient had been increasingly ill for some time, and he called upon the ex-monk to help him find a cause. They explored his recent history and found that he had cleared a forest in preparing to make an extended rice field. He had cut down trees in the forest without an effort to ritually inform the spirit that might reside in the forest and to whom, in a sense, it belonged.

No Budget for Spirits

That reminded me of a story told to me by an American embassy friend in Bangkok who was charged with overseeing some expansion of part of the embassy.

On the selected grounds was a large banyan tree. Banyans have a special place in Hindu-Buddhist history and they are prominent in various religious sites in Thailand and throughout Southeast Asia. The Buddha preached his central message under such a tree, reflected in its Latin scientific name, ficus religiosa. The workers were reluctant to remove the tree without a special ceremony but proceeded nonetheless. After several accidents, they would not continue work. My friend understood the problem and proceeded with an appropriate ceremony to ask permission and appease the spirit of the tree. The men then went back to work without further incident. My friend was pleased, but he had the task of paying for the ceremony and, as he said, the State Department has no budget items for dealing with spirits. He slipped it into an entertainment item and just hoped that the auditors from Washington would not call him out.

Thais traditionally recognize two sorts of causation, known to anthropologists in other parts of the world as, quoting Aristotle, proximate and ultimate causes. This man and his exorcist had learned the proximate cause of his illness, "chest disease" (loog kapo, in Thai) (and specifically tuberculosis) diagnosed in Chiang Mai and the signs of which are clear on his body. He was being treated at the Chiang Mai Chest Disease Clinic, near the city's south gate on the road to Chom Thong. He had been making the arduous bus trips to the city and was beginning to receive the same sort of biomedical treatment for this TB that he would have received in the U.S. or the U.K., where many of Chiang Mai's government and private physicians would have trained. But what was the ultimate cause of his illness?

The offended forest spirit (phii paa) was diagnosed by the ex-monk and the ill man as a possible cause and thus a reason for the ceremony to drive out the spirit that had entered the man. If that cause was not dealt with, the man might have suffered other problems: his wife might have left him, or his child might have been hit by a truck on the highway, or his rice crop might have failed. The potential for success with his TB was great, but even if it was cured, he might suffer other calamities unless the ultimate cause was dealt with. Some Thai physicians may recognize this matter as a traditional Thai one. Others may not be concerned that someone needs to seek other causes. If causes other than biomedical ones are sought first, a patient might solely deal with spirits rather than also dealing with the illness or delay seeking a physician's help. Some sufferers may not even have access to such biomedical help.

Finally, it is worth noting that traditionally and commonly in Thailand, people are sympathetic to both "natural knowledge" (witayasat) and "spiritual knowledge," or they might be said to value both. When I was in Thailand, at one point a professor of chemistry at a Bangkok university reached middle age and retired from the university in order to go assist a spirit medium. It was reasonable for him to devote a main part of his career to "natural knowledge" but then to retire from that to be concerned with the other sort of knowledge.