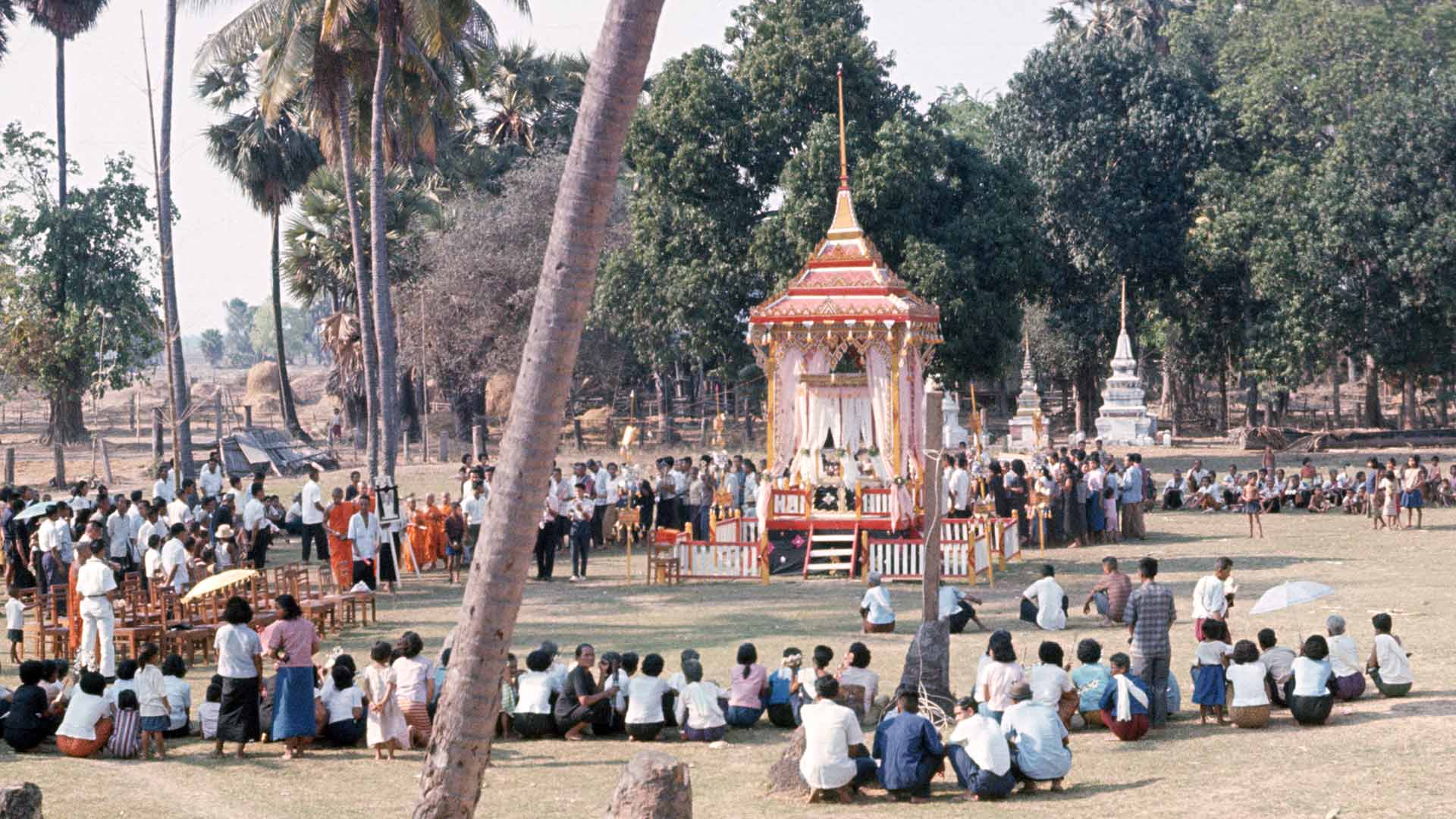 This article is part of a series of articles on Buddhism in Thailand. Please visit the Buddhism in Mid-20th Century Thai Villages online exhibit for an introduction to the topic and other articles in the series.
Given the subject matter of this article, we have tried not to show images that readers would find disturbing. However, please be advised that the following article contains descriptions and photos of funerals, cremation, and the deceased.

In 1965–1966, I was living with my wife and our two young children in the village of Lao Khwan (Wat Bot District, Phitsanulok Province) doing anthropological research with particular attention to health and illness beliefs and behavior. Several deaths occurred during that time. I will describe funeral and creation ceremonies that were held for three of the deceased—two in the village and another on the grounds of the larger district temple—and the central involvement of monks.

Lao Khwan village spanned both sides of the Khwae Noi River. It had a small temple that served it and several other nearby villages. It had a senior monk, several junior monks, and novices in residence. It was located on the west side of the river, as was the district temple.

The district center, Wat Bot, about a 10-minute walk away, was located on the east side of the river. Wat Bot is the site of several government offices and stores, as well as the large district Buddhist temple on the opposite shore. That temple was the site of a school and also a place where monks came to study for ranks in the monkhood. In Thai, the monkhood is termed the sangha, and monks are called phra or bhikku.

Another funeral was held for a young village woman who died some time ago but who was buried pending preparations for the cremation ceremony for which she was exhumed.

In the early morning the deceased man in his coffin was ferried across the river on a small raft accompanied by several relatives. Lao Khwan villagers and several monks waited at the village temple.

Novices by the Fire

Two boys—a son and a nephew of the deceased—were received at the temple by the senior monk. They brought monk's robes and their heads were shaven, as would be done at the ordination of a monk. After donning the robes, the boys bowed respectfully to the senior monk. They were becoming naen na fai ("novices by the fire") and would play a role at the cremation site, especially in leading the monks in circumambulating (walking around) the funeral pyre.

The Coffin and the Funeral Pyre

The coffin was carried to a wooded area just south of the village. Monks and novices from the local temple sat there on mats in a row by the coffin, with the senior monk nearest the head of the deceased. Villagers were arrayed on both sides of the coffin and those facing the monks were kneeling and giving a respectful waj (palms of the hands touching) as the monks chanted. A candle burned at the head of the coffin, and a white string extended there through the hands of the monks as they chanted. The white string is a mark of purity, and, in the temple, it might lead from the image of the Buddha through the hands of seated monks.

The coffin was then carried by village elders—led by monks still holding the white string—and was placed on the funeral pyre, which was decorated with paper streamers. The village headman made final adjustments to the coffin on the pyre as people gathered around it.

The senior monk then held a white cloth (bangsukun) which was attached to the head of the coffin. He prayed and then he "pulled the cloth away" (cak bangsukun), marking the separation of the deceased from this world. Villagers then circled the pyre 3 times in a counterclockwise direction, led by the two "novices by the fire" and the local temple's monks. (On auspicious occasions, such as the ordination of a monk, people walk around the temple's ordination hall in a clockwise direction.) Some people carried flowers crafted from palm fronds to toss on the fire.

On the following morning, a temple elder (dressed in the blue shirt in the photos below) and a son of the deceased met with 2 monks by the ashes and bones from the cremation fire. The men shaped a rough effigy of the deceased in the ash with some of his bones, and they made a small ladder of bamboo at the foot of the effigy. Some bones were also placed in the white jar that was later taken to the home of the deceased and housed there on a special shelf. The monk then held a Malay-style plaid cloth at the head of the effigy, as he had done with the white bangsukun cloth at the head of the coffin on the pyre the day before, and he said a prayer while the elder gave a waj.

The elder then gathered some of the remaining bones and placed them in a little palm leaf boat, which he then launched on the river. Several items assured that the spirit of the deceased would be on its proper way: the bamboo ladder to the other world, the cloth pulled away by the monk after giving a blessing, and the boat floating away on the river.

On another occasion, the grave of a young woman was opened. She had died during the busy farming season and had been buried until her family and others could prepare for the cremation. A monk said a prayer while holding a patterned Malay-style bangsukun cloth from the head of the deceased to lead her spirit on the way to the afterworld. This replicated the ritual performed over the post-cremation bones of the deceased person described earlier.

The corpse was placed in a fresh coffin, a white cloth was placed over a large portion of it, and then people came to view it. As you can see, even the youngest children are not excluded from this viewing—or from any other aspect of the funeral rituals, as their presence in these photographs suggests.

Meanwhile, monks gathered at the cremation site and prayers were said while monks held a white string leading to the coffin. The monks led the white cloth covered coffin around the pyre before placing it there for burning.

Monks at Funerals outside of Thailand

Monks may play a part in leading a coffin to burial even in a very different setting from that of village of urban Thailand. In 2003, monks led a burial procession at Arlington National Cemetary in the U.S. for a Buddhist Lao-American Marine, Corporal Kemaphoom "Ahn" Chanawongse, who was killed in Iraq. The coffin was carried by U.S. Marines and was not served by a circumambulation of participants.

The temple located at the district center, Wat Bot, was the site of a much grander funeral ceremony for the former district head. Not surprisingly, the more prominent that people were in life, the grander their cremation ceremonies would be at death. People gathered initially in the sala (public hall) of the temple, where there was an elaborate display of flowers and offerings. A large photo of the deceased draped in a black cloth was also displayed in the sala while an orchestra played. The guests made gifts of money to the family of the deceased, and the family, in turn, made gifts of cloth and other items for the monks in attendance.

Monks at the District Funeral

People gathered near where the monks would sit and where some monks would don new robes. One of the monks gave a sermon while the people surrounded his ornamental chair. The monks were then served their meal at the appropriate time, before midday when their fasting would begin.

At the pyre where the coffin rested, a monk said a blessing over it. He had a ceremonial fan, which is held by monks on all occasions when they recite prayers. The lower photo below shows the colorful fans belonging to the monks who were looking from the sala before joining the procession below.

Following their meal, the monks waited outside the public hall for the procession around the funeral pyre. They lined up behind the senior monk from the Lao Khwan temple, while the young "novices by the fire" lined up separately.

Activities at the Pyre

At the elaborate tower of the cremation pyre, many villagers and other guests congregated and lined up to pay their respects to the deceased at his coffin. The widow in a black dress and government official in his formal white uniform paid their respects and laid flowers on the coffin.

Villagers waited to see the procession around the pyre. They held "flowers" made from palm and bamboo which they would throw on the cremation fire as people did at the village funeral. Unlike at the village cremation, here, a village-style orchestra played outside by the funeral pyre.

For all those present at this ceremony, just as in the village funeral, the final event before the cremation was the procession 3 times around the pyre, led by the monks.