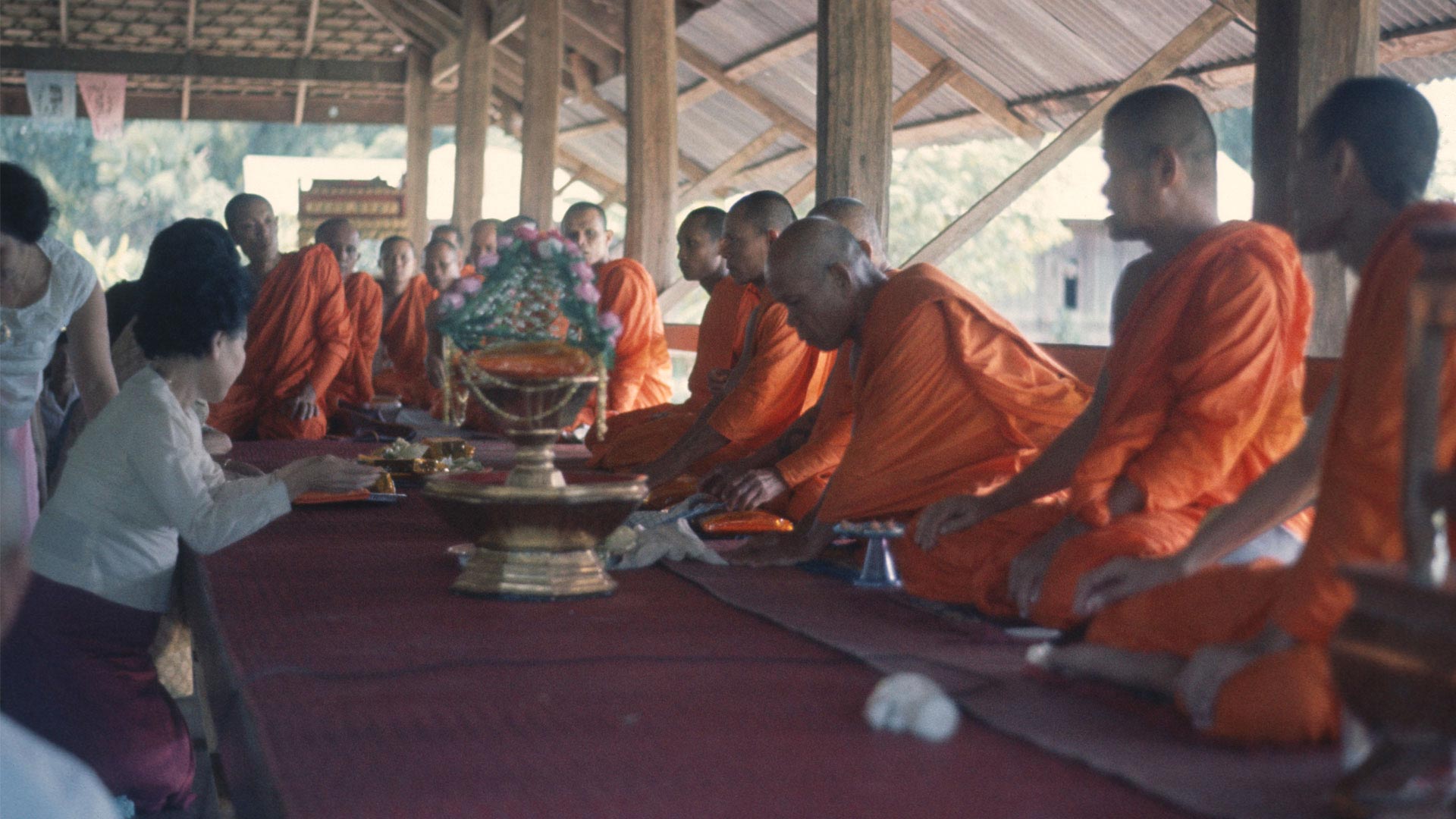 Thot Kathin: The ceremonial presentation of new robes and gifts to Buddhist monks in Thailand

Thot Kathin is one of the 6 main purely religious ceremonies connected with Buddhism in Thailand. Thot is pronounced as in English “taught." In Kathin, the “th” is an aspirated t (pronounced with an extra puff of air).

At this ceremony, held at the end of the rainy season between the full moons of October and November, 3 new robes and other gifts are offered to monks at temples where they have been in retreat. The gift in effect rewards the monks for remaining in the temple in study, teaching, and contemplation during the 3-month rainy season. Thais call this period either Vassa or Pansaa, both meaning “rainy season” or “year”; it is sometimes referred to as “Buddhist Lent.” At the end of Pansaa, the monks in their new robes may go out into the world for pilgrimage or other reasons. This custom goes back to the time of Buddha, over 2,000 years ago, where it is described in an ancient text. In Thailand it dates to at least 1293 CE, when it was described on a stone tablet erected by Thailand’s first king, Ram Khamheng. During the rainy season, certain gifts may be given to the temple without ceremony, such as food, medicines, and repair to the dwellings.

As Kenneth Wells writes in his book Thai Buddhism, Thot Kathin means “to lay down a wooden frame on which to cut cloth.” In the past, the cloth for the robes would be patched together from cast off pieces. Today, they are made of new cloth that consists of 14 patches sewn together to make rectangular garments. 2 of the garments are 10 feet long and 6.5 feet wide and the third cloth is narrower by half.

Such robes are on display in the Southeast Asia and Oceania: "Crossroads" exhibit of the Museum, along with other possessions allowed to a monk: beads, sandals, an umbrella, an alms bowl and its carrying straps, a razor for head shaving, a drinking cup, and a filter for straining live organisms from the drinking water. Monks also may have a needle and thread and a fan.

The photo at the back of this case shows monks receiving alms of rice in their bowls. In giving those alms, people (especially women) gain “merit” (bun) toward their ultimate fate. Only males may become monks and thus gain merit in that way, but women may obtain merit by ordaining sons as monks and by giving alms. When monks go out in the morning in rural and urban areas carrying their alms bowls to receive rice and other food items for their two daily meals, they provide what is called a “field of merit” for the alms-giver, who gains merit by the act of giving. Some non-Buddhist observers have mistakenly described this as “begging for their food”, which totally misunderstands the meaning of the giving. Sponsoring and participating in a Thot Kathin ceremony brings much merit.

The particular Thot Kathin ceremony described and illustrated here was held in 1965 in the province of Phitsanulok, central Thailand. In this ceremony, new robes and gifts are given by a group of people or by individuals in one place for the benefit of monks at a temple (wat) in another place. Usually the temple receiving these gifts is a relatively poor one, often in a rural area. Diverse sorts of secular groups or organizations may sponsor the giving, and they may be from a more prosperous urban area. In this case, the ceremony was organized by the girls’ high school in the province’s capital city, Phitsanulok, and it served a rural temple in a village some half hour by boat south from the city on the Nan River. If a village group does a Kathin for a temple in another village, it is understood that the favor will be returned. Only one Kathin is permitted per year in a temple.

People gathered in the city in early morning. A small parade of young men playing Malay-style drums moved through the city to announce the event and collect alms for the rural temple. Bystanders might give them gifts of money to be taken to the rural temple. Prominent among them were the girls from the high school in their uniforms, some of whom carried gifts for the monks: from left to right, they have new yellow robes, pillows and bedding, food items such as tea or rice, and kerosene lamps for the temple in the village, which lacked electricity.

Many people gathered by the main jetty on the riverside and prepared to join the decorated boat for the trip. The boat then headed onto the river for the trip to the rural village. Rivers are an important source for transportation of people and goods in Thailand (including the pottery being delivered in this photo). Across the river in central Phitsanulok, houseboats can be seen. They are the only houseboats in Thailand to be allowed to moor in the middle of a city, and because new ones may not be added, this custom will no doubt fade in time from this river scene.

When the Thai King goes from his palace in Bangkok to do a Kathin, he travels by his grand decorated barge rowed by many uniformed oarsmen. He is also accompanied by others in their boats in a grand procession said to be like a military parade or naval review.

The villagers wait by the river for the visitors from the city. When the boat arrives, the passengers debark at the base of the hill by the river and all of them go to the temple grounds, where participants undertake merit-making activities and celebrate. The young men from the town, who had paraded there with their drums, join the newcomers and drum and dance outside the temple’s main hall (salaa) where the gifts will be delivered. This building is the portion of the temple complex that is open to the public and is the center for various rites and events. Those present may also walk 3 times around the structure called the vihara or bot, entrance to which is reserved for the monks.

The monks gathered and were seated on a raised platform at the end of the hall facing the villagers and their guests. An image of the Lord Buddha rests on one of several raised gold-colored stands in the front of which are incense sticks, a candle, and flowers. This image normally resides in the bot. The senior monks present were seated nearest to the Buddha image and were in their mandatory 3 robes, with one as a sash over the left shoulder. The younger monks or novices sat further from the image. This group of monks consisted of those living in this temple as well as some who visited from other temples for the ceremony. The headmistress of the girls’ high school then took the lead in presenting gifts to the senior monk of the temple, and she was followed by other visitors who delivered the other gifts and displayed the new robes. A leader of the donor group lit candles and incense sticks before the image of Buddha and repeated  the Three Refuges in the Pali, the ancient Indian language used in books of the Buddhist canon.

All of the gifts and the new robes were placed on the platform in front of the monks, and proper respect was given to them in words and by means of the gesture with the palms of both hands together (waj), which is given to all persons who deserve respect owing to their age or social position. In Thailand, even tiny children in the arms of caregivers are taught to waj their parents and other elders. On a visit to Thailand, President Lyndon Johnson was photographed giving the waj to a young child, to the amuseument of Thai onlookers.

During the ceremony, outside the hall women prepared the food to be served first to the monks and then to the congregation. As blessings were said over the meal by the monks, the audience kneeled in respect before them. The monks ate this meal before midday when their daily fasting would begin. Then the visitors too ate the sumptuous meal.

People gathered outside of the hall during and after the events inside and amused themselves by singing and dancing before going to the boat to return to Phitsanulok.

For those who wish to learn more about the role of monks and ceremonies such as the Thot Kathin, the following books are recommended: