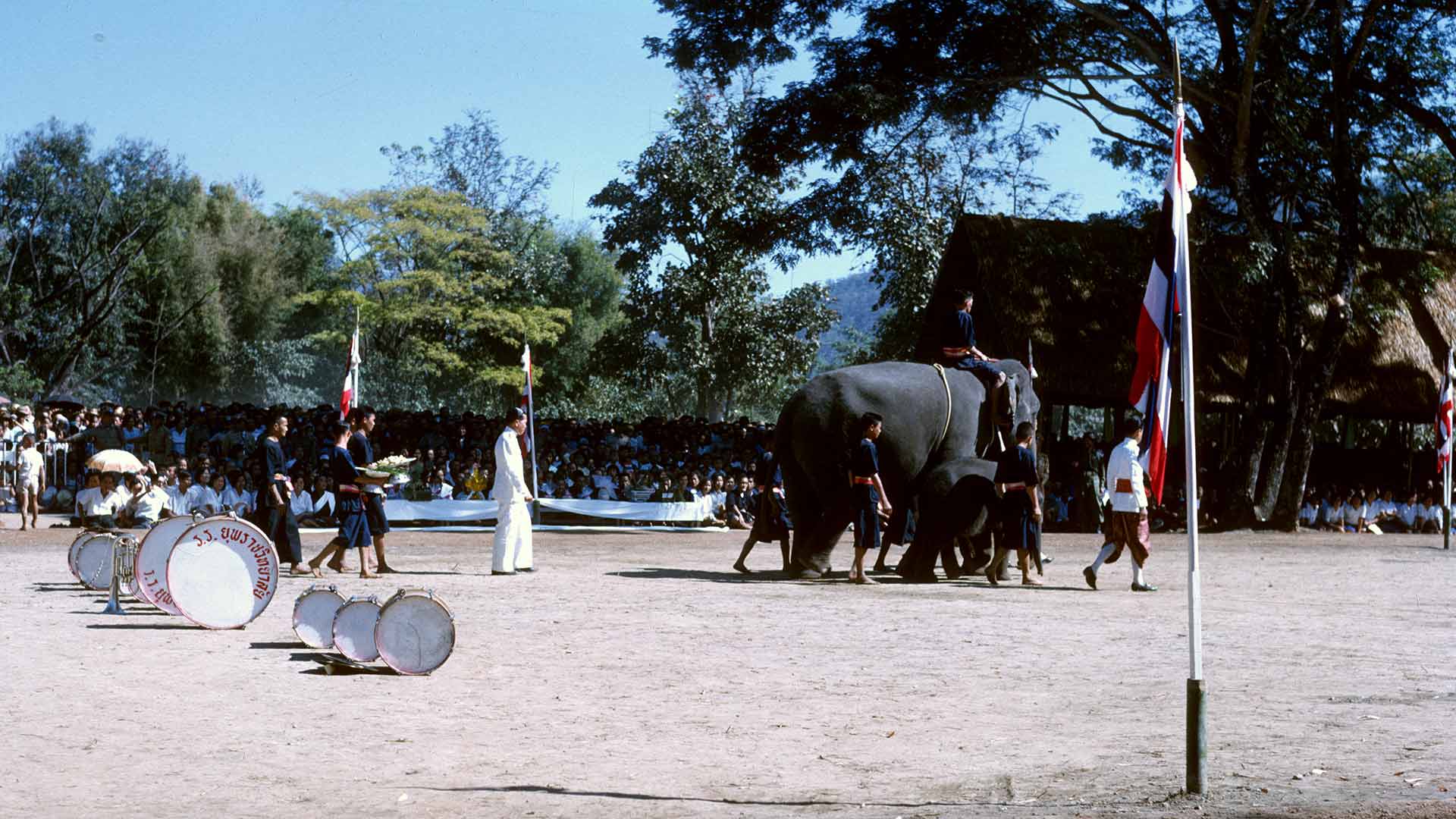 The presentation in Thailand of a white elephant to the late King H.M. Bhumibol Adulyadej

In 1968–1969 I was living in Chiang Mai, Thailand, as part of the Chiang Mai-Illinois Project at the Faculty of Medicine, Chiang Mai University. I was a cultural/medical anthropologist involved for two years in the project before going to the University of Illinois, Urbana-Champaign where I spent my career. I was fortunate to be able to attend a day long ceremony in the nearby town of San Kamphaeng just southeast of Chiang Mai city where a young white elephant was presented to the King of Thailand. In this photo essay, I shall describe and show pictures of the events of the day and then discuss the historic and symbolic relationship between a white elephant and royalty in Thailand (and Myanmar, then called Burma).

First I should note that, despite the name "white elephant" in English and other European and Asian languages and their very white depiction in Thai art, a white elephant is not literally white in color. It is an albino of the same species. Its skin may be reddish or pink and it may have certain visible features (such as fair eyelashes and toenails and light-colored hair) or other discernible ones (such as sweet-smelling feces). Such features must be ascertained by Brahman ritual specialists of the royal court in Bangkok.

White elephants are few in number at any one time and are kept in special royal enclosures overseen by Brahman ritual specialists and their mahouts (elephant keeper). These elephants are ancient Hindu symbols of power and well-being for divine kings (the deva raj) and their subjects, and they also have a place in Buddhism, for which the Thai king still serves as patron. Thus the ceremony around a white elephant involves the religious pluralism that is a feature of Thailand and other Southeast Asian nations. You can see other examples of this religious pluralism in other photo essays in this series.

Arrival at the Ceremony

On the appointed day for the ceremony, a reserved area had been established at San Kampheng with a special building and monks.

The area was modestly fenced and watched over by policemen to contain the numbers of villagers and townspeople who came to observe the event. In front of the fenced area was a place for students to sit on the ground and observe the ceremony, especially students from Chiang Mai University, who were favorites of King Bhumibol Adulyadej and to whom he presented diplomas at the annual university graduation. The second photo shows girls protecting themselves from the midday sun with umbrellas.

A Range of Attire

Guests from Chiang Mai and Bangkok were present and formally attired. Men who were government officials were dressed in the official uniforms (mainly white) of their positions. Other men wore Western-style suits and ties. Police wore brown uniforms and Army officers were in dark green or white uniforms. Many women were dressed in traditional Thai-style formal clothing, though some were in formal Western-style dresses. Students wore black skirts/pants with white blouses/shirts. The King's Brahman ritual attendants were in traditional Thai outfits with billowing pants, white shirts, and colored sashes around their waists.

The Supreme Patriarch of the Buddhist monkhood, in his formal robes, came from Bangkok by plane to Chiang Mai and then by auto to San Kamphaeng where he was welcomed and escorted by a provincial government official to the ceremonial enclosure.

Queen Sirikit and her daughter, Princess Maha Chakri Sirindhorn, were escorted by military officers upon their arrival. The Princess carried a parasol to shade her mother. They were then joined by King Bhumibol Adulyadej in his military-style uniform.

The King was noted for his involvement in—and observation of—development projects for hill tribes in Northern Thailand and Thais in other regions. He was helped by the Princess in his various projects and often accompanied by her on tours in those areas. He was held in great reverence as a symbol of the nation and one who was dedicated to the well-being of the people. He was the patron of the nation’s Buddhist faith. He passed away in 2016 at the age of 88, having reigned for 70 years and 126 days, a reign exceeding that of Queen Elizabeth who in turn exceeded the reign of Queen Victoria. When the king had just passed away, he was shown in the New York Times obituary article in a picture from a 2008 interview where he was in full uniform while wheeled by an Army officer and accompanied by the Queen and the Princess.

Presentations to the King

The King was presented a gift by a young woman kneeling in proper fashion, and she was flanked by a row of other young women who were then led away by a formal military escort.

In Thailand, beauty is prized and in women may be believed to represent a sign of their good merit from past lives; hence, young women considered to be beautiful are especially appropriate to make a presentation to the king. When in 1968 Miss Apasara Hongsukun was the first Thai to win the Miss Universe Pageant, she was welcomed back home by the Buddhist Supreme Patriarch, who noted her beauty as a sign of her past merit and for which she should subsequently lead a meritorious life.

Procession of Elephants through the Grounds

Once all of the guests, officials, and royals were present, the young white elephant was led on to the ceremonial grounds by its mother, a human escort of royal mahouts, a Brahman priest, and a provincial government official.

Arrival at the Anointing Stand

A mahout then climbed on the mother elephant and led the 2 animals to just outside a special stand by where the young one was to be anointed by the King. At that time, students came to see the white elephant and to receive instruction about the nature of the ceremony from knowledgeable officials.

In the meantime, ritual and secular officials prepared food items that would be presented to the elephants as well as the ceremonial water for anointing the white elephant by the King.

Conclusion of the Ritual

A mahout led the mother and the white elephant in to the special platform which had been built in a shaded structure for the final ritual. There the king mounted the platform and anointed the white elephant, which marked the culmination of the ritual.

"(White elephants) are considered sacred because of their presence in the story of the birth of the Buddha, which saw his mother dreaming of a white elephant." Nicholas Edmondson, "The Original White Elephants of Myanmar,” 2012

Additionally, white elephants have been kept and cared for by kings for centuries. In the animal kingdom, elephants are clearly awesome in size and power, and they have long been tamed and used in Thailand and Myanmar (Burma) for the difficult task of moving timber. This continues today, as shown in the photos taken in 1965 on Thailand's Khwae Noi river in Wat Bot District, Phitsanulok Province. Timber is taken there from nearby upriver forests and sent downriver as far as Bangkok, some 350 miles to the south.

As of 2010, Myanmar had a total of 9 white elephants, and the rest were kept in Nay Pyi Daw, the new capital of Myanmar. The nation no longer has a king and was led then by an army junta. However, a newspaper article in 2002  article noted that the previous white elephants were "...heralded in lavish ceremonies where Myanmar's military leaders sprinkled them with scented water laced with gold, silver, and precious gems." It described the finding of a white elephant who was re-housed "at the Mindhamma Hill Park, in suburban Yangon (formerly Rangoon and Burma's capital) where [it and previously discovered white elephants] live in an enclosure with spiraled pavilions, a manmade waterfall, ponds, trees, and vegetation."

At that time, a Thai representative in Bangkok of the Friends of the Asian Elephant Foundation noted that "...the group normally objects to placing elephants in captivity but stopped short of criticizing the capture of white elephants." She said, "the white elephant is a sign of great blessings and fortune for the land," and that Thailand and Myanmar are similar on the subject. At one point, King Bhumibol Adulyadej had 10 such elephants.

The representative did not note, however, that the nations were dissimilar in who anointed the white elephants, nor did she mention that, in the 16th century, Thailand and Myanmar (then Siam and Burma) fought a war over the ownership of several white elephants. Being sacred, these animals were not allowed to work, and their upkeep could be expensive. Thus a king might give them to his enemies: their upkeep could cause bankruptcy and ruin.