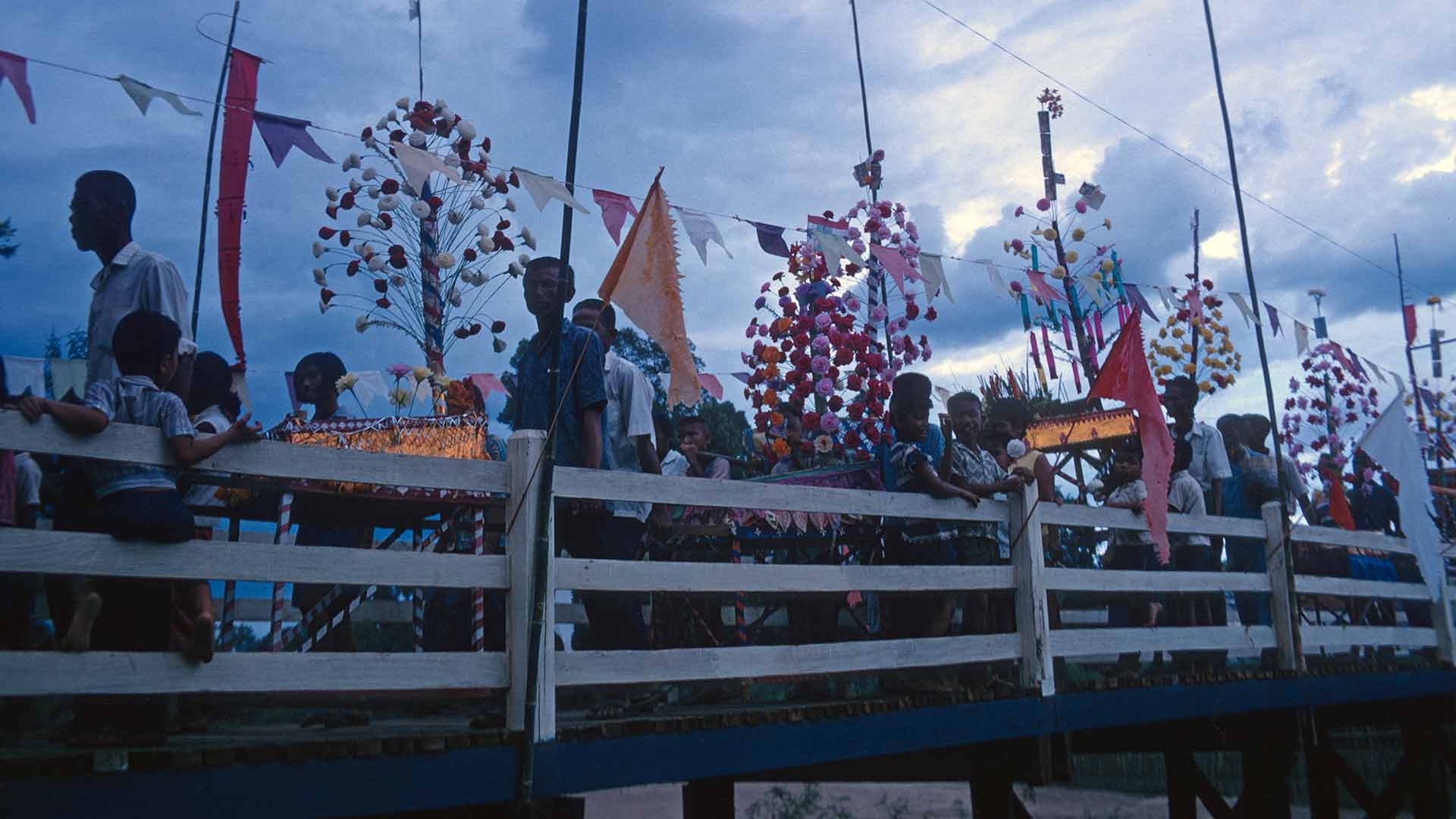 Monks at a Bridge Opening in Northern Thailand

As shown in other articles in this series, monks play a significant role in life cycle rituals such as funerals, as well as in secular and political events such as the white elephant ceremony or university graduations. They also give spiritual guidance and teaching to individuals. When monks join in secular events, it is sometimes met by controversy and even opposition among some of their followers. However, during the Vietnam War and the upheavals in Myanmar in recent years, monks in those countries often played a significant role in political demonstrations. In Thailand, their ventures into the political sphere have been limited, but some monks have been active in secular development-related activities such as the building of hospitals. This article concerns a leading role monks played in consecrating the community effort of building a bridge across the Ping River just south of Chiang Mai city in 1969. It linked the administrative and market places of two populous districts, Saraphi and Chom Tong.

Two monks are shown crossing that newly built bridge coming from the temple on the east side of the river where they were staying. The elder monk in the orange robe was the senior one responsible for the ceremony; the monk in the darker robe was on pilgrimage and just visiting the temple.

The Beginning of the Event

In the first photo above, the elaborately decorated bridge is shown from the east side where the event was to begin. The red, white, and blue banners on the gateway represent Thailand's national flag. The second photo shows the officials who represent the two districts and who pronounce that things are underway.

The parade of equally decorative dancers will cross the bridge to begin the events.

Crossing the Bridge with Gifts

A group of women from Saraphi district in the east have crossed the bridge and will be involved in the various main events to be held on the west side. They are followed by some men carrying the ornate gifts which will be presented to the spirit lord of the river.

Other gifts are shown with the carrying poles that will be used to take them across the river. These various gifts were carried across the bridge as the day progressed.

At the west end of the bridge, a special shaded place for monks was set up. In this photo they are giving prayers to a Buddha image.

Though I have referred earlier to this event as a bridge opening "ceremony," it is also like a festival. At festivals, food is plentiful and the 5 following photos show the various types of food sellers who were present. Some sat on mats on the ground, while others had tables and several kinds of carts with their equipment and wares. People ate meals and snacks throughout the day.

Boys and girls from elementary and secondary schools helped to provide entertainment. Some sang and danced in school uniforms and pretty pink dresses, while others did traditional dances in richly colorful national dress. Two costumed girls demonstrated wooden sword dances. A traveling troupe set up a formal stage and performed a play.

On the Bank of the River

In late afternoon, all of the elaborate gifts to placate the spirit lord of the river were carried down to a flat beach below the west bank, the water running low at this time of the year. Several types of spirit shrines had been built there, including a post to hold offerings and a spirit house decorated on the front with a Thailand flag. Some speeches were made there by spirit doctors (moo phii).

On the west side of the river, a building was set aside for monks to receive visitors, as the monk in the photo below is doing. Monks could also have meals there. The room contained an altar with a Buddha image and various candles and decorative items, as well as pictures of the Thai king and the presiding monk. Behind these were large Thailand flags covering the wall.

An individual event was held for the senior monk in a different, simpler building. A Thai soldier and his mother and wife had prepared various gifts for the monk. Before leaving for the war then going on in Vietnam, the soldier and his squad from North Thailand had been blessed by the monk. This solder and his family were representing the squad members, none of whom had been killed in the war, in thanking the monk for his blessing.

The Role of Monks at the Bridge Opening

The bridge opening ceremony involved many members of the communities on both sides of the river that were hoped to benefit economically from the bridge construction. As seen in some other articles in this series, Thailand's religious pluralism was well represented by the prominent role of the senior Buddhist monk and his colleagues and by the attention to the spirit lord of the river. Some Buddhist purists in Thailand might have argued that the involvement of the monks was unnecessary and not appropriate to their nature of non-involvement in things of the world; however it is more than likely that others would have felt the attention to the river spirit was quite enough and appropriate. Other persons of equal Buddhist persuasion welcomed the effort of the senior monk, who was noted for making various forays in development activities in Thailand.

In the article about the spirit exorcism of the man with tuberculosis, his inattention to the forest spirit where he cleared land was believed to have caused that spirit to enter him and bring his illness. Spirits can act upon individuals, but spirits of places, if unattended, can also act upon communities. The bridge was felt to be a potential intrusion upon the river, no matter how helpful it was to people living on both sides and sanctioned by the participation of Buddhist monks at its opening. Therefore, the monks thus gave very elaborate attention to placating its spirit.

The presence of monks at this occasion was considered a valuable part of both the bridge building and the celebration of its opening, as were the roles of local government officials. In the late 1960s and beyond, economic development, particularly devoted to rural and remote communities, has been a national effort, one that was close to the heart of the late King Bhumibol Adulyadej. The bridge opening scene was marked by the decorative presence of the nation's flag as well as pictures of the king on the monk's altar.